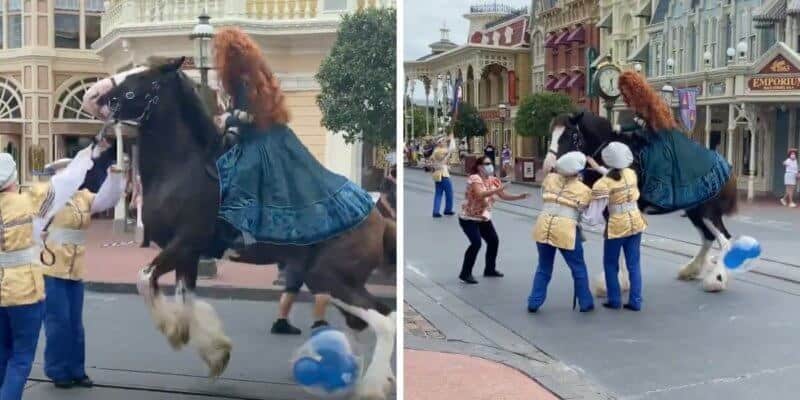 Disney World is making history as they welcomed back their guests beginning today, July 11, at Magic Kingdom and Disney’s Animal Kingdom and will welcome Guests back on July 15 at EPCOT and Disney’s Hollywood Studios.

However, during reopening day at Magic Kingdom, Merida’s horse, who Merida rides during the Disney Princess cavalcade which happens periodically throughout the day, got spooked by a balloon and had to be escorted off of Main Street USA.

According to the YouTube video, Merida’s horse was spooked by a balloon a child was holding and accidentally let go of, which then got wrapped up in the horse’s feet, and was then walked off of backstage by cast members.

Merida’s Horse Gets Caught in a Balloon at Disney World Magic Kingdom During Small Princess Parade. A toddler ran out into the parade route. The father grabbed the toddler to safety, but the balloon the toddler was carrying kept going into the route and spooked the horse. Both Merida and the horse were okay.

According to the video, it looks as though everyone is okay and safe after this unfortunate incident and Inside the Magic will continue to update you as we get more information.

Keep in mind if you plan on visiting Walt Disney World Resort, there have been a lot of protocols put into place to keep the guests and cast members safe. These include social distancing measures, excessive cleanliness, encouragement of mobile orders, plexiglass, the elimination of character meet and greets, parades and fireworks, and more.

There are also changes to the FastPass+ system and the PhotoPass System along with changes for previously bought tickets including refunds and exchanges.

Did you visit Magic Kingdom or Disney’s Animal Kingdom on reopening day? Let us know in the comments below.