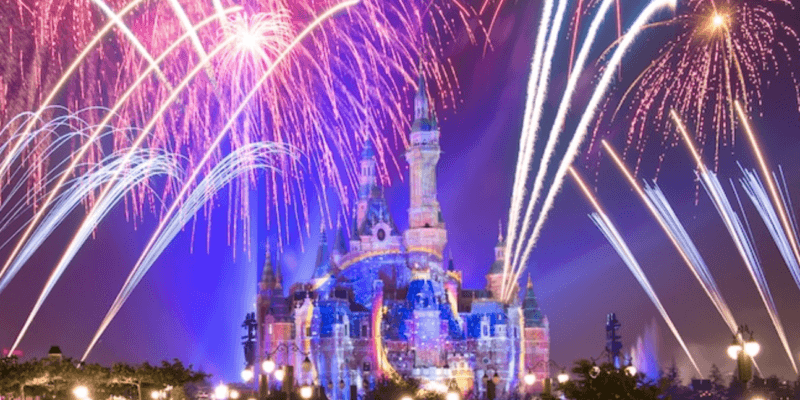 On May 11, 2020, Shanghai Disneyland reopened its gates to the public with new strict health and safety protocols put in place. This included no live stage shows or other live performances were able to resume within the theme park.

However, it wasn’t long ago that Shanghai Disneyland decided to take the next step in its phased reopening as it resumed some stage performances with the theme park’s standard social distancing protocols in place.

Five shows are currently operating at Shanghai Disney park including:

During these performances and shows, the audience is seated far away from the stage in actual seats — there is currently no standing room offered.

But now it looks as though Shanghai Disney is bringing back another performance — Its nighttime fireworks spectacular, Ignite the Dream – A Nighttime Spectacular of Magic and Light!

According to twitter user @gourmetdyy, Shanghai Disney has brought back Ignite the Dream – A Nighttime Spectacular of Magic and Light, with social distancing measures in place.

The official Shanghai Disney website has also been updated showing the available showtimes for Ignite the Dream. On Monday, July 27, there will be a showing at 9 pm local time.

It wasn’t long ago Inside the Magic reported that Disney Parks in Walt Disney World stated they would like to resume live stage shows. According to WFTV, Disney’s full statement says:

“As we reopen our theme parks, we would like to include live stage shows. We have heard from many cast members that they are eager to return; however, the Actors’ Equity Association has not agreed to the terms of the recall impacting our ability to invite these cast members back at this time. The health and well-being of our cast members and guests is an important priority for us, and our theme park reopening plan has been approved by county and state officials.”

With Shanghai Disney starting to resume more shows at their theme park, will other Disney Parks around the world follow in their footsteps? We will continue to update you as we get new information on this topic.

Are you excited to see the resumption of Ignite the Dream – A Nighttime Spectacular of Magic and Light at Shanghai Disney? Do you think Walt Disney World will resume their nighttime shows soon? Let us know in the comments below.

If you want to visit Shanghai Disney on your next family vacation, but aren’t sure where to begin planning, then don’t hesitate to reach out to our friends over at the Authorized Disney Vacation Planners at Academy Travel for a free quote.