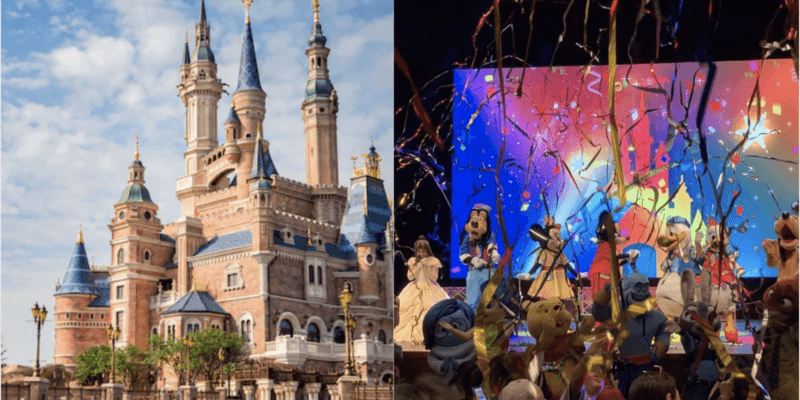 On May 11, Shanghai Disneyland reopened with strict health and safety protocols in-place. At that time, no live stage shows or other live performances were occurring in the theme park.

Now, however, certain performances featuring Disney characters are being allowed to run! Just a few hours ago, Instagram user Rosa_Wuxin shared this festive photo of Mickey, Minnie, Pluto, Ariel, Belle, Winnie the Pooh, and many of their friends onstage amid a flurry of glitter and confetti.

Also in Shanghai’s Tomorrowland, Club Destin-E has a single daily showing and in Treasure Cove, the Eye of the Storm: Captain Jack’s Stunt Spectacular stage performance is running seven times each day.

It is important to note that only those performances in which the audience is seated away from the stage in actual seats (not standing room only) are operational at this time.

Parades, including Mickey’s Storybook Express, are not running in the Disney theme park at this time. The nighttime fireworks spectacular, Ignite the Dream – A Nighttime Spectacular of Magic and Light, is also still closed while social distancing is being practiced.

What could this mean for Walt Disney World and Disneyland?

While both the theme parks and the Downtown Disney district in Anaheim remain closed, Walt Disney World’s Disney Springs area started its phased reopening yesterday. While certain activities are not available at this time, much of the shopping and dining venue is open to the public.

With the Florida Economic Task Force set to hear Florida theme park reopening plans today, it’s likely that we’ll know a reopening date for Disney World Resort sooner rather than later. The fact that Shanghai Disneyland has restarted certain live entertainment shows after about a week-and-a-half may give us a timeline for what to expect in the U.S. Disney theme parks.

What do you think about some live entertainment resuming at Disneyland Shanghai Resort? Tell us in the comments!

Comments Off on Shanghai Disneyland Resumes Some Live Shows!