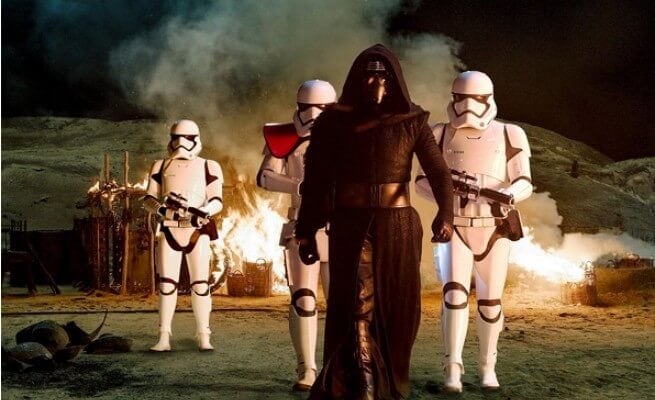 For the first time in Star Wars history, a Stormtrooper shot down someone wielding a lightsaber.

A man was standing on the streets of Batuu having just reached the point in his Jedi training where he could build his own lightsaber. Excitement coursed through his veins and he held his new weapon.

Then he saw him: Kylo Ren. The brooding masked leader of the Knights of Ren, the First Order, and the fallen apprentice of Luke Skywalker was walking towards him with Stormtrooper escorts. Like all padawans, our hero was too eager to decline such an opportunity to take down this villain.

He ignited his sword and prepared to engage. But his adversaries looked on unimpressed. Still, they press him and the padawan sees he bit off more than he could chew. He tried to withdraw, but it was too late. Kylo Ren told him to calms down but caught sight of the lightsaber. Recognizing this padawan as no immediate threat, Ren let his security detail take care of it. The stormtrooper simply said, “If there’s one Jedi left, it’s not you.”

The three villains continued on, leaving our wannabe Jedi wrecked in the street.

A F F I R M A T I V E pic.twitter.com/BsMaieBElm

Yes, this video is hilarious, but it is a great example of how Disney prepares its characters to interact with the guests.

Because let’s be honest, Kylo can’t stop to fight every guest stepping out of Savi’s Workshop. Plus, the streets of the Black Spire Outpost are way too crowded to allow that kind of behavior.

But, look even outside of Star Wars: Galaxy’s Edge. Think about how many proposals the Disney Princesses receive every day and need to let down ever so gently. Think about all of the shirt tugs and tail pulls from little kids. Think about the infinite combinations of thoughts, questions, and actions that would get thrown at our beloved characters on a daily basis.

Disney continues to ride that line of immersion almost perfectly, and it is something to admire.

Comments Off on “If there’s one Jedi left, it’s not you.” Stormtrooper burns guest at Star Wars: Galaxy’s Edge