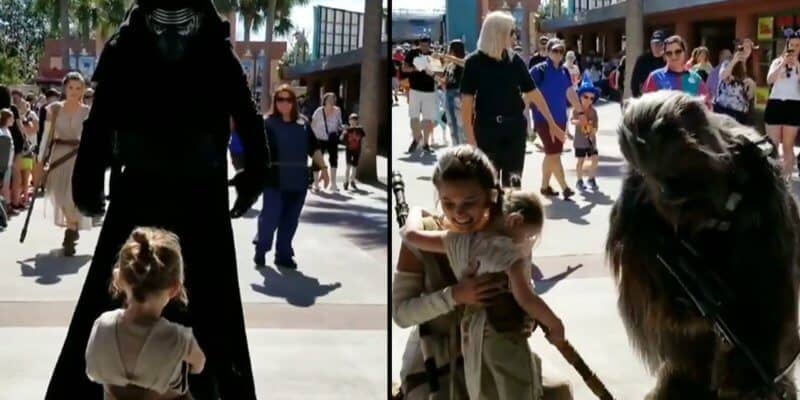 If it was ever a question whether kids love “Star Wars,” it shouldn’t be anymore. One little girl’s encounter with some of her favorite characters is proof.

Since Star Wars: Galaxy’s Edge opens to the public this month at Disney’s Hollywood Studios at Walt Disney World, one mom recently shared a video of her adorable daughter’s experience meeting some pretty amazing characters at the theme park this year.

Candace Harmon said to local Florida news outlet Fox 35 that her four-year-old daughter, Vanessa, is so obsessed with “Star Wars” that she even gets into character when she dresses up. She insisted on being called Rey on this day she spent in Hollywood Studios.

In the video, which is a big hit among Disney Parks and “Star Wars” fans alike, you can see little Vanessa bravely facing some of the Dark Side and the First Order before getting a hug from her favorite character, Rey herself. Take a look at this young Jedi’s encounter with Kylo Ren, Rey, and Chewbacca in the video below:

In honor of Galaxy's Edge opening to the public this month at Hollywood Studios, I wanted to reshare this AMAZING experience we had with Vanessa.⠀ ⠀ She was chosen to fight and protect all of us there at the park. There were some close calls, but she used the force with all her might (ok, except she was waving at the bad guys ?).⠀ ⠀ I can't wait to see what other experiences my little Rey will have once we enter Galaxy's Edge! We will definitely be dressing them up soon! ⠀ ⠀ #starwars #starwarscosplay #starwarsfans #starwarslife #starwarslaunchbay #disneyobsessed #disneycosplay #disneybound #disneyaddict #disneystyle #disneygram #disneyside #disneylove #disneyparks #disneylife #disneymagic #instadisney #disneyvideo #galaxysedge #abc7eyewitness #hollywoodstudios #disneyinsta #hollywoodstudios30 #disneyfamily #disneyfanatic #disneyaddicts #ohmydisney #disneyfun #waltdisneyworld #disneygrammers

This video of four-year-old Vanessa’s encounter with some of the “Star Wars” characters at Disney’s Hollywood Studios is proof that kids really do like “Star Wars” after all. With the less than stellar success of Star Wars: Galaxy’s Edge at Disneyland, some critics think that kids are disconnected with the “Star Wars” franchise, and if kids liked “Star Wars” more, then Galaxy’s Edge would be a lot more popular. But anyone who watches the above video of this little Jedi can see that kids just like Vanessa love “Star Wars” probably as much as their parents do.

You can still encounter some “Star Wars” characters at Launch Bay at Disney’s Hollywood Studios, but you’ll see Rey, Chewbacca, Kylo Ren, and the Stormtroopers at Star Wars: Galaxy’s Edge once it officially opens to the public on August 29.

What do you think of this little girl’s experience meeting “Star Wars” characters? Is Vanessa proof that kids love “Star Wars” after all? Let us know in the comments!