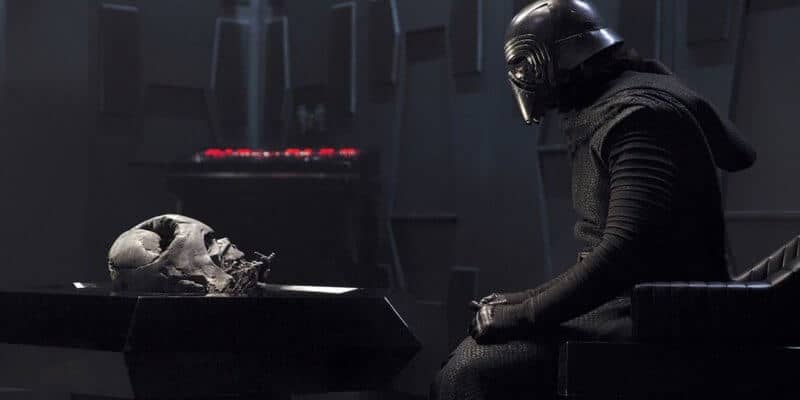 “Star Wars” fans have (with few exceptions) come to love the addition of Kylo Ren’s character, but they may be surprised to learn how different (and frightening!) he was originally supposed to look.

The earliest inspiration for Kylo Ren’s look did not include his iconic and helmet and armor inspired by his grandfather Darth Vader, but instead features much more sinister concept. The original concept art below was shared by Christian Alzmann, a Lucasfilm Concept Artist and Art Director. Throughout his career with Lucasfilm, Alzmann has been responsible for creating the looks for many of the characters in “The Force Awakens” along with Kylo Ren’s original and current looks.

It is fascinating to see the differences and similarities between Kylo Ren’s original and actual designs alongside Darth Vader’s character. If this original concept art were used for “The Force Awakens,” Kylo Ren’s similarities with Darth Vader would have existed below the helmet and armor, which may have concerned some fans in that the story could have become too close to “A New Hope.”

We love seeing original art though and learning how concepts for characters change over time leading up to film releases, and in this case the design inspiration for Kylo Ren’s early artwork ended up staying in the “Star Wars” universe. If you happen to watch the animated series “Star Wars Rebels,” you may see bits of this original design in Fifth Brother.

Though Alzmann’s original design was not used in its entirety, fans of the series may notice some hints of Kylo Ren’s concept art there. If you’re not familiar with “Star Wars Rebels,” Fifth Brother is part of The Inquisitors, a group that took down some of the remaining Jedi much earlier in the “Star Wars” timeline (the series takes place five years before “A New Hope”).

Kylo Ren returns to theaters this December for “Star Wars: The Rise of Skywalker.” Can’t wait until this winter for the conclusion of the Skywalker saga? Some fans think Disney will share a peek of the film at this year’s D23 events (we’ll keep you posted if they do!).

If you’re looking to come face to face with Kylo Ren in person, you can find him on your next trip to the Walt Disney World Resort. He’s meeting guests at Star Wars: Launch Bay in Disney’s Hollywood Studios until  he moves to Star Wars: Galaxy’s Edge when it opens next week on August 29!

Need help planning that trip to the dark side?  Our preferred Authorized Disney Vacation Planners at Academy Travel are here to help! They can plan every detail of your trip from booking resorts and helping with dining details to filling you in on where to meet your favorite “Star Wars” characters. Click here for a free Disney World vacation quote!

What do you think of the original concept for Kylo Ren? Are you happy with the direction he ended up going in, or do you prefer the original?