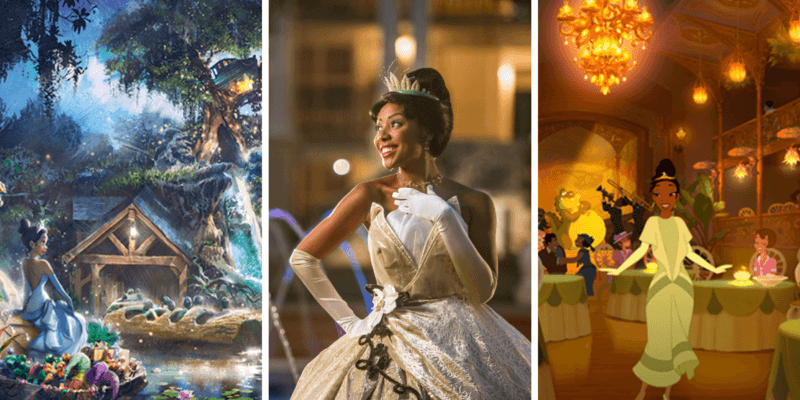 Since 2009, the Walt Disney Animation Studios film The Princess and the Frog has delighted fans of all ages. So much so, that Disney has continued to incorporate Princess Tiana, Naveen, Louis, and the themes and stories of this animated Disney classic into the theme parks and resorts.

“With a modern twist on a classic tale, this animated comedy is set in the great city of New Orleans. Featuring a beautiful girl named Tiana, a frog prince who desperately wants to be human again, and a fateful kiss that leads them both on a hilarious adventure through the mystical bayous of Louisiana.” –Disney Movies

In this article, you will find all of the latest information about The Princess and the Frog Disneyland and Disney World attractions, as well as possible restaurants and other additions at the theme parks and resorts. As Disney officials release more information about the Splash Mountain retheme and Princess Tiana’s presence in the parks, we will update this page.

Walt Disney Imagineering plans to bring Princess Tiana to the theme parks in new ways, including with her very own attraction dedicated to continuing her story.

In Summer 2020, Disney announced that the Splash Mountain attraction at Disneyland Park at Disneyland Resort and Magic Kingdom at Walt Disney World Resort will be rethemed to The Princess and the Frog.

Here’s what Disney Parks Blog said in the announcement of the attraction retheme:

Splash Mountain – at both Disneyland park in California and Magic Kingdom park in Florida – will soon be completely reimagined. The theme is inspired by an all-time favorite animated Disney film, “The Princess and the Frog.” We pick up this story after the final kiss, and join Princess Tiana and Louis on a musical adventure – featuring some of the powerful music from the film – as they prepare for their first-ever Mardi Gras performance.

Walt Disney Imagineering President Bob Weis had this to share regarding when the attraction renovations will begin at Disneyland and Disney World:

“We have separate project teams working on these efforts, but we are still evaluating project timelines based on the extended closures we’ve experienced due to COVID-19. While several projects, like Avengers Campus—at both Disney California Adventure and Disneyland Paris—are able to surge forward based on where we were in development, there are others that will be picked back up in stages—like Mickey & Minnie’s Runaway Railway and TRON—and some that are longer-term that we will need more time to assess. We are working with our operations partners now to determine timing for this project to get under way. For now, we know that both Magic Kingdom and Disneyland parks will re-open with the existing Splash Mountain attraction.”

When Disney World fans found this out, they flocked to the attraction to purchase as much Splash Mountain merchandise as they could. At the time of this article’s publication, the theme parks of the Disneyland Resort are not yet open amid the ongoing pandemic. However, we’re taking Disney’s word for it, and until the company says otherwise, it seems that Disneyland Guests will get to ride Splash Mountain when the Happiest Place on Earth reopens its gates.

It has not yet been announced when the Splash Mountain renovations will begin so that Tiana, Naveen, Louis, Ray, and all of the other characters from The Princess and the Frog will finally get their own attraction at the Disney Parks. But, as soon as Disney announces when the old attraction will close and the new one will open, we will be sure to update Inside the Magic.

Princess and the Frog Restaurant at Disney World, or Tiana’s Palace at Disneyland?

At D23 Expo 2019, Disney Parks, Experiences and Products announced that Princess Tiana would be getting her own restaurant at Walt Disney World Resort. At the time, it was announced that the new dining location would be located at Reflections – A Lakeside Disney Lodge, a new Disney Vacation Club project that was in the works in Florida.

However, the hotel where the restaurant was supposed to be located has seemingly been put on hold. There is no word whether work will continue on this new Disney Resort or whether the project has been cut altogether (though the announcement has been removed from Disney’s press releases). At this time, the future of a Princess Tiana restaurant at Walt Disney World is unknown, and we don’t know if it is still coming to a Florida Disney Park.

A Princess and the Frog-themed restaurant has not been announced for Disneyland Resort, but it has certainly been hinted at. Anika Noni Rose (a Disney Legend and the original voice of Tiana) shared just a few months ago how much she would love for Tiana’s Place (or Tiana’s Palace) restaurant to come to Disneyland.

“People keep asking me like I’m in charge of making the restaurant [at Disney],” Rose said in an interview with PEOPLE. “I’m like, ‘One thing at a time!’ But people are excited. That makes me feel good because it’s been 11 years since the movie came out. For people to still have a great, excited, motivated love for Princess Tiana and for the movie is really wonderful.”

She said that, once the attraction retheming is complete and Tiana has her own Disneyland attraction, she’d love for the company to build the Disney Princess’s restaurant in the theme park.

“I’ve been looking forward to a Tiana’s Palace for years,” she said. “I agree with the fans that it would be great. I have dreams of them partnering with [New Orleans’] Café du Monde on some real deal beignets, having some fantastic shrimp and grits and king cake during Mardi Gras season. And the occasional second line through the joint … Basically all the things I love!”

Disney has not made any announcements regarding whether they will make room for Tiana’s restaurant at Disneyland (or whether they will retheme an existing dining location). However, many fans are holding out hope that it will happen.

What Else Is Disney Cooking Up?

We have been closely following the news regarding the new Princess and the Frog additions to Disney World and Disneyland. And in May 2021, we discovered something pretty interesting! It looks like Disneyland Resort could be cooking up something new, and Princess Tiana herself could be involved.

When it comes to The Princess and the Frog at Disney World, not much has been shared as of summer 2021. But over in California at Disneyland, it looks like we may be getting a new shop, quick-service restaurant, or something else entirely, and the signs at this Disney Park have us really speculating.

It’s rather vague, but the former location of Le Bat En Rouge in Disneyland Park now has several signs displayed in the windows, and they seem to hint that there will be a Princess and the Frog addition to New Orleans Square.

You can read more in our article here!

We aren’t yet sure what to make of this, and we’ll report back when Disney shares more information. But how awesome would it be for Disneyland fans if we got a Princess Tiana shop or dining spot in New Orleans Square, even before the Splash Mountain retheme takes place?

Where Can You Find Princess Tiana Right Now?

Remember that you can see Princess Tiana at both Walt Disney World Resort in Florida and Disneyland Resort in California! She consistently makes appearances in Magic Kingdom Park and Disneyland Park, so if you are taking a trip anytime soon, be sure to say hello.

In Walt Disney World, you can commonly see Princess Tiana in parades and cavalcades in Magic Kingdom, and sometimes you will even see her with Princes Naveen!

In Disneyland Resort, you can see Princess Tiana in parades as well as in New Orleans Square. Remember to tell her you tried her famous beignets and gumbo!

More About The Princess and the Frog

Not very familiar with this animated Disney classic? Here’s the official film description, courtesy of D23:

Tiana, a young African-American girl, is living amid the charming elegance and grandeur of the French Quarter of New Orleans in this musical set in the legendary birthplace of jazz. Her lifelong goal is to own her own restaurant. But when she meets neer-do-well Prince Naveen, who has been turned into a frog, she falls for the “kiss the frog” line and becomes a frog herself with the fateful kiss instead of transforming the handsome prince. This leads to an adventure through the mystical bayous of Louisiana. Directed by Ron Clements and John Musker. Released on November 25, 2009 in New York and Burbank (exclusive 2 ½ week engagement at the Disney Studio theater) and nationwide on December 11. Voices include Anika Noni Rose (Tiana), Bruno Campos (Prince Naveen), John Goodman (“Big Daddy” La Bouff), Keith David (Dr. Facilier), Michael-Leon Wooley (Louis), Jennifer Cody (Charlotte), Jim Cummings (Ray), Peter Bartlett (Lawrence), Jenifer Lewis (Mama Odie), Oprah Winfrey (Eudora). 97 min. Songs and score by Randy Newman, a New Orleans native, who also does the voice of Cousin Randy. Based on an original story by Ron Clements and John Musker. Working title was The Frog Princess.

What do you think about the presence of The Princess and the Frog at Disney Parks? Do you hope Tiana’s Palace (or Tiana’s Place, as it is called at the end of the film and aboard Disney Cruise Line) restaurant will come to Disneyland or Disney World? Are you happy or unhappy about the Splash Mountain retheme? Let us know in the comments.

This article has been updated since it was originally published to include the most recent information about The Princess and the Frog at Disney World and Disneyland.