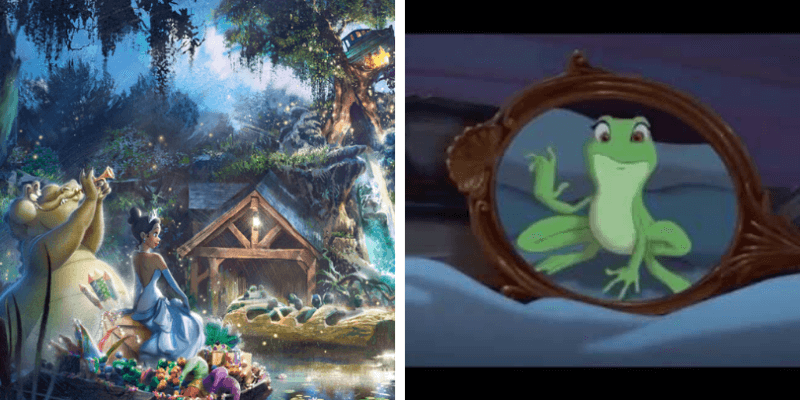 Yesterday, Disney announced Splash Mountain’s re-theme to Princess and the Frog.  Fans quickly responded to this news and it sparked some questions, too.  A major one being will Princess Tiana be human, frog, or a combination of both on the new attraction in its new storyline, and the other one being why is Splash Mountain being re-themed now?

Here’s what we know so far on what the ride will look like for Princess Tiana.

There were some concerns from Disney fans who are very excited about this attraction re-theme.  Many Princess Tiana fans are saying she better not be a frog the whole time and she deserves to be human.  Well, cue the lyrics from “When We’re Human” from the soundtrack because she is human!

In Disney’s announcement, they’ve given a snippet of what the ride storyline is.  It sounds like we’re going to be on a great musical adventure!

“We pick up this story after the final kiss, and join Princess Tiana and Louis on a musical adventure – featuring some of the powerful music from the film – as they prepare for their first-ever Mardi Gras performance.”

Because the attraction will take place after Tiana and Naveen become human again, it makes sense for Tiana to be a human for the entire duration of the ride.

Disney is no stranger to re-theming attractions in their parks.  For example, the submarine ride at Disneyland park was re-themed into a Finding Nemo attraction, and Disney California Adventure changed Tower of Terror into a Guardians of the Galaxy ride and California Screamin’ to the Incredicoaster.

People are wondering about the timing of this decision though, and if stemmed from recent events like the petition to re-theme Splash Mountain and a counter petition to keep it in original form.  We know that Disney has said that this re-theme has been in the imagineering process for over a year and Bob Weis, Disney Imagineering President, answers why now.

There’s no expiration date on great storytelling, and Imagineers consider it a great privilege to be able to bring these stories to life in our parks, resorts, and on board our cruise ships. Disney’s extraordinary collection of stories is incredibly vast. This year, we unveiled Mickey & Minnie’s Runaway Railway at Disney’s Hollywood Studios in Orlando—also in development at Disneyland park in Anaheim—and while the attraction is based on modern animated shorts, they are very much an homage to the early 1920s and ’30s style of animation. We would be missing a lot of opportunity if we limited ourselves to a specific period in time.

We have a longstanding history of enhancing attractions with “new magic,” like Pirates of the Caribbean, and completely retheming others, like Guardians of the Galaxy – Mission: BREAKOUT! We completely understand that these decisions aren’t always popular, but I think our biggest fans know that we care as much as they do.

But whatever the reason and whenever the timing, it’s still great that Princess Tiana is being showcased.  She’s the first and only Black princess in official Disney Princess lineup, and now she’ll have a home base in the Disney Parks.  You can typically see her gracing the areas of New Orleans Square in Disneyland and featured in parades, and we’re excited to see what she thinks about the Splash Mountain re-theme when the Disney Parks reopen.