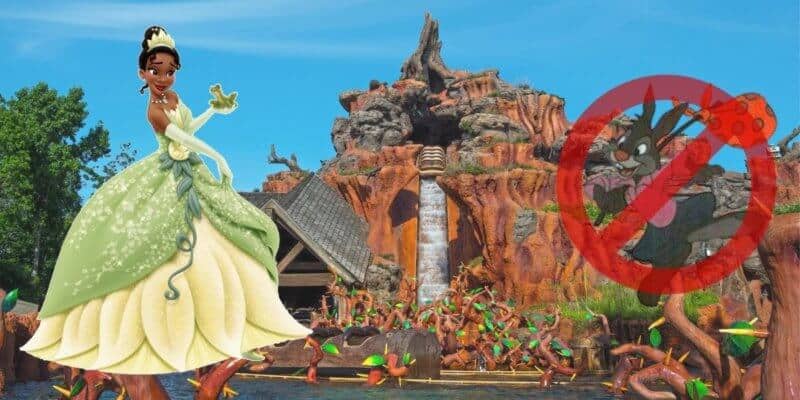 Protests have been held across the entire country in various cities surrounding the unfortunate event involving the death of George Floyd. People are coming together to speak out on social justice and to bring awareness to the Black Lives Matter Movement all across the country.

The Walt Disney Company recently released a statement while Disney Channel, Disney XD, and other Disney affiliates took to social media to show their support for the Black Lives Matter Movement. But now, Disney fans have taken to Twitter to speak out about one very iconic Disney attraction — Splash Mountain.

There is a Splash Mountain ride located in Magic Kingdom at Walt Disney World and at Disneyland park in Disneyland Resort. In case you aren’t aware, both versions of Splash Mountain are currently based on the controversial 1946 film, Song of the South — Which is widely criticized for its portrayal of African Americans.

Then, another Twitter user posted concept art which shows re-theming of Splash Mountain from Song of the South to The Princess and the Frog.

There are a total of three tweets which break down the entire retheme of the attraction in the Disney Parks — including Mama Odie’s place as the queue and loading area, swimming through the bayou, and bypassing some of the famous Voodoo dolls.

Princess and the Frog Splash Mountain retheme for Disneyland thread. Just put on the soundtrack and a splash ridethrough while reading this. pic.twitter.com/8z5wOalyB7

This concept art has now led to a petition on change.org, which currently has over 12,200 signatures from Disney fans to change the theming of this classic thrill ride — and they continue to grow by the minute.

The Walt Disney Company: Re-theme Splash Mountain to Princess and the Frog – Sign the Petition! https://t.co/xl2sWoKHbD via @Change

While some Twitter users and Disney fans are all for this new theme of Splash Mountain, others aren’t for the change and would like to see Splash Mountain remain the way it is while The Princess and the Frog gets its own incredible concept elsewhere.

I disagree on the Splash Mountain change idea. The Princess & The Frog concept is absolutely genius and incredible but it deserves its own space and not as a cover up. SM is one of a kind and one of the best in the park (the CA DL), rebranding it won’t do it any good

Other Twitter users are all for a retheme, however, they are proposing Emperor’s New Groove so Disney fans can finally get a ride that incorporates the mega water slide!

With #songofthesouth trending today I believe that #splashmountain will soon get a re-theme in the not so distant future! I am proposing we change it to the water slide based on The Emperor's New Groove!

The official description of Splash Mountain in Magic Kingdom reads:

Please keep in mind, Disney has not officially announced or have made a statement regarding the re-theming of Splash Mountain.

What do you think of the re-theme idea? Let us know your thoughts in the comments.