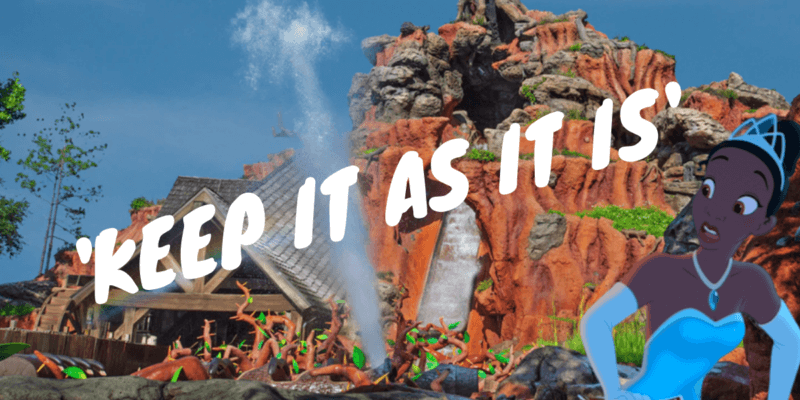 The Splash Mountain saga continues as a counter-petition to keep Splash Mountain at the Magic Kingdom as it is has emerged. We recently reported that a petition had emerged to update the theming of the ride to the Princess and the Frog, to make it more sensitive to the racial injustice of the past.

Splash Mountain is based on the widely controversial Song of the South – one of 600 films and television shows yet to make it to Disney Plus, and one that likely never will thanks to its dated portrayal of African-Americans.

With the powerful effectiveness of the Black Lives Matter movement, many pieces of media are being called out as out of touch and offensive, and this iconic theme park attraction is one of them. It stands to reason that re-theming the ride to The Princess and the Frog (Disney‘s first animated black princess movie) would be a strong stance against racism. However, the counter group argues that the animated characters of the ride do nothing to promote a racist stereotype.

It’ll be up to Disney theme parks to change their Splash Mountain theme, should they find them out of touch and offensive to the black community. As is, here are both petitions in full as well as links to their change.org pages!

The Original Petition to re-theme Splash Mountain on change.org

Disney parks should be a home for all to enjoy regardless of race, age, whatever your background may be. The classic log flume ride Splash Mountain is featured in Disneyland, Disney World and Tokyo Disneyland. While the ride is considered a beloved classic it’s history and storyline are steeped in extremely problematic and stereotypical racist tropes from the 1946 film Song of the South.

There is a huge need for diversity in the parks and this could help fill that need. Princess and the Frog is a beloved princess movie but has very little representation in the parks. Tiana could be one of the first princesses with a thrill ride, as well as giving her a much deserved place in the parks. The framing of the ride is such that it could be easily changed to tell the story of Tiana while not compromising too much of the ride/costing a fortune in remodeling for Disney. This change could kill two birds with one stone, remove the offensive stereotypical theming the ride currently has and bring a much needed diversity to the parks. As well as a much bigger merchandising opportunity for Princess and the Frog.

Splash Mountain is located in Critter Country/Frontierland in the parks, an area very close to New Orleans Square in Disneyland. It would be fairly easy to transition the ride into the bayou of New Orleans considering the location of the ride in each park.

While the rides storyline is not an exact version of the movies plot line it is derivative from it, the characters, the songs and locations are all main features of the ride. Disney has removed Song of the South from its library, refusing to share it on DVD or their streaming services. The best next step to remove all traces of this racist movie would be to re-theme Splash Mountain into a Princess and the Frog themed ride.

Splash Mountain is in iconic ride at Magic Kingdom and has been such for nearly 50 years. There is nothing wrong with the ride and is loved by millions of fans all over the world. To change such an iconic ride would erode The Nostalgia that lives in Disney World and take away a little bit of the magic.

The want to change the ride to be themed to something more politically correct is foolish. The characters in The Ride do not specifically generalize any race or group of people. They are nothing more than caricatures of turn of the century America. To change them would be to remove a bid of our art history from the world and to be ashamed of it.

Show your support and let Disney know that you want Splash Mountain to stay exactly the way it is!

Which petition will you be signing? Does the Splash Mountain ride provide a harsh reminder of racial injustice, or is it a classic Disney park attraction that should stay as it is? Let us know in the comments below.