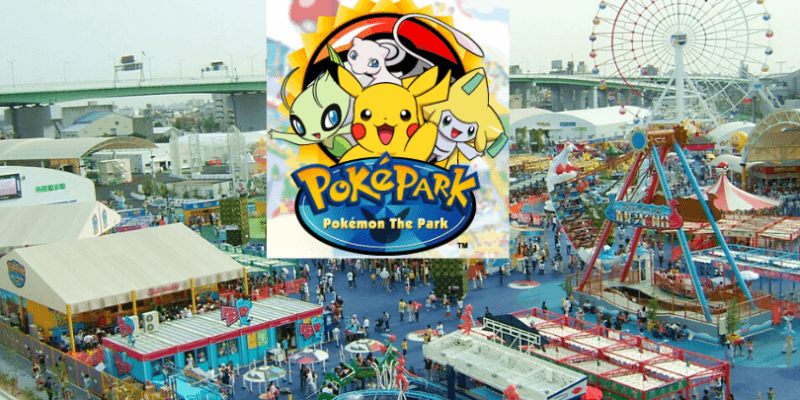 In the 1980s and 90s it seemed that theme parks and video games were very much their own thing with their own fandoms. However, recent decades have merged the two, and we’ve even seen fans create their own Disneyland and Haunted Mansion themed Animal Crossing islands. On a larger scale, we’ve also seen the collaboration between Nintendo and Universal culminate in the upcoming Super Nintendo World park in Osaka and eventually Orlando, the latter of which appears to be near completion.

However, long before Universal, the iconic game developer created a Nintendo theme park based on one of its most popular video game series; Pokemon.

Like Disney, Pokemon has become cemented in popular culture and remains an insanely popular multi-media franchise to this day. As a Pokemon trainer, your goal is split between battling and befriending Pokemon to obtain the eight badges of your region. 1996’s Pokemon Red and Green versions are still the third best-selling Nintendo games of all time after Wii Sports and Tetris.

So, with such a popular franchise, the theme park possibilities were seemingly endless and Nintendo decided to create an entire Pokemon-themed theme park; PokePark (Not to be confused with the Wii game of the same name).

As a Pokemon fan myself, the idea of an entire amusement park dedicated to our favorite pocket monster franchise is a dream come true.

The park opened in March 2005 and ran until just September of the same year in Aichi, Japan, before going on tour in Taiwan between June and September 2006. Despite being open for such a short time, it was actually quite a substantial theme park, with a restaurant, several cool attractions, and even a nightclub! It was free to enter, but each individual attraction cost money to ride.

Here’s a list outlining each attraction taken from Bulbapedia, the Pokemon wiki;

Choose a Team Aqua car or a Team Magma car, and face off against the opposite team in a bumper car battle.

Twister: Fury in the Sky

Ride on a ship shaped like Latios and Latias that flies high up in the air and crashes down into water.

Navigate boats through swirling water and around Lugia.

Ride on a swing with Mew, Celebi, and Jirachi.

Take a train ride with the Pichu Brothers, Wynaut, and Munchlax.

Ride in a giant ferris wheel with cars in the shapes of various Poké Balls.

Ride through the air in Pikachu-shaped cars.

Ride on a merry-go-round with Raikou, Entei, and Suicune instead of horses.

Will we ever see PokePark theme park in Japan again?

Probably not. It seems like the park was a promotional tool to promote the new upcoming entries in the Pokemon series; Pokemon Diamond and Pearl versions. Besides giving out a few free ‘gift’ Pokemon to some lucky Gameboy Advance holders, the park has become nothing more than an obscure footnote in the franchise’s history.

However, it’s pretty likely that we will see some kind of Pokemon-themed attraction or ride at Universal Studios’ Super Nintendo World. We already know that the park features a Mario Kart Ride and a dark ride based on Yoshi’s Story and it stands to reason that other characters from popular Nintendo video game franchises like Donkey Kong, Animal Crossing, The Legend of Zelda, and yes, Pokemon will also appear.

Still, PokePark remains an interesting bit of lost history in the worlds of both Pokemon and theme parks.

Are you a Pokemon trainer in the making? Would you have liked to have visited the PokePark theme park? Let us know in the comments below.