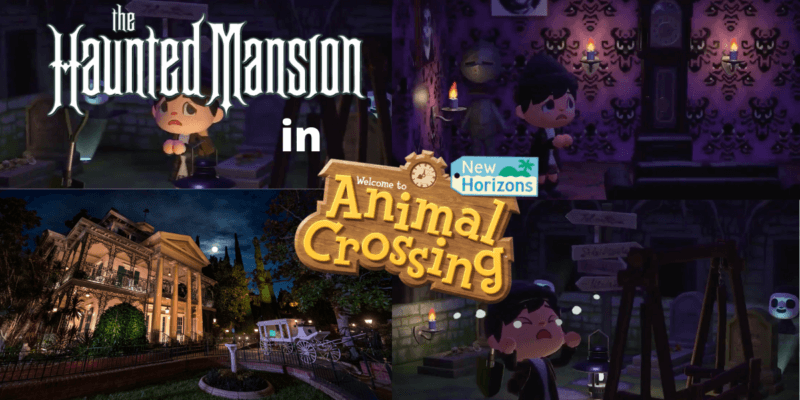 But nothing. NOTHING. Will prepare you for this spooktacular island mansion in Animal Crossing New Horizons that is a complete replica of Walt Disney World (and most other Disney park’s) most macabre attraction.

Twitter user @capuchinokappu has combined a love for Animal Crossing and a fan favorite Disney park attraction to completely recreate the Haunted Mansion on their Animal Crossing island. We need a QR code. Stat.

I made this spooky video of it to celebrate, I hope you guys like it :’)#acnh #hauntedmansion ??? pic.twitter.com/hx3qvhPdyv

Wow. That is some devotion to the Haunted Mansion! We love everything about what this user has done with their Animal Crossing house. The blend of Nintendo and Disney unsurprisingly draws Luigi’s Mansion to mind, but this is Disney’s Haunted Mansion through and through.

Where to begin? The cobblestone path, the gravestones, the painting; it’s all so perfect! The only thing missing is a tangible ghost!

Animal Crossing’s only ghost is a little fella named Wisp who (I think – correct me if I’m wrong) is impossible to bring into your mansion, so we’ll let them off.

With that said, this user has done an insanely good job of bringing the Haunted Mansion to the usually jovial land of Animal Crossing. The lack of ghosts is no problem when the ride is so beautifully translated.

Additions like the crystal ball and the Halloween skull blend amazingly with the ornate furniture. There’s even a portrait of the Hatbox Ghost! If there was one thing I’d never imagine seeing in Animal Crossing, it’s him.

I think if I were Animal Crossing’s Happy Home Academy, I think I’d be too scared to give this player a bad score;

“When you said you were bringing in Disney characters, this is not what I had in mind!”

My biggest question is, where did that wallpaper come from? I’d kill for some wallpaper like that in my Animal Crossing house! If there is a QR code, hit me up!

Regardless, it’s so cool to see the Disney and Animal Crossing communities come together and make content with Disney Parks themes. The Haunted Mansion is such a big part of almost every flagship Disney park, it is definitely the right place to include in your Disney Animal Crossing island.

We love seeing cool stuff like this from Animal Crossing users. If you are playing Animal Crossing New Horizons and have created a theme park ride on your island, let us know. We’re always looking for new horizons to cover!

Capuchinokappu has set the custom design bar too high. This isn’t a meme or a game. This is Animal Crossing art!