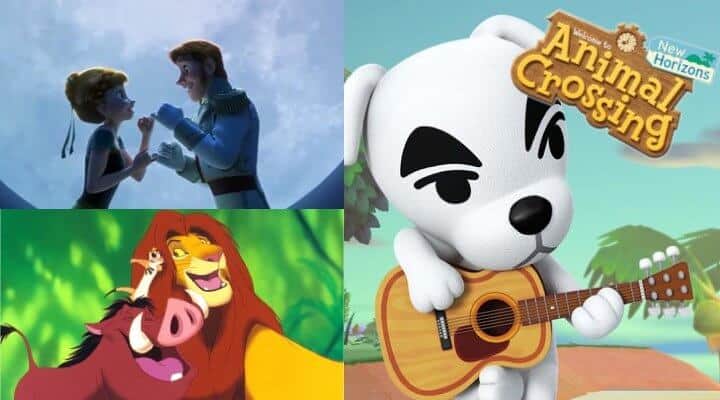 Animal Crossing: New Horizons continues to take the world by storm. Just yesterday we shared one fan who recreated the entirety of Disneyland on their island home. We’ve also seen the introduction of Disney, Marvel, and Star Wars themed outfits. It seems these two series were made to be together!

Well, some talented fans on Youtube have taken this connection one step further and have started covering popular Disney songs in the style of K.K Slider. For those who don’t know, Slider is one of the biggest Animal Crossing icons alongside Tom Nook and Isabella. He is a super-chill guitarist-singer who plays a big role in the game’s main storyline.

Animal Crossing is well known for its charming, cooky voices, and K.K’s dulcet tones are no exception. Now some clever Disney fans have recreated some classic Disney songs in the style of the popular video game. Let’s take a listen and see how well they capture the spirit of the Disney world.

I Just Can’t Wait to Be King – The Lion King

This classic Lion King track has been reworked, and frankly, I wouldn’t mind if K.K was the king of my deserted island! The design and attention to detail that this person has put in is just mind blowing. I’d love to see what other cool stuff this person has created and what their character and fictional island theme looks like. I bet its a magical design!

Do You Want to Build a Snowman – Frozen

This Animal Crossing clearly loves the world of Frozen. No, it’s not the cover of an Able Sister’s song, but the Disney characters of Anna and Elsa, of course! Anna is the Disney princess that takes the lead vocals in this song, but the princess is in good company with Animal Crossing’s uber-talented K.K Slider. If I was recreating the Magic Kingdom on my island town, this is the music I’d want playing!

Ain’t No Mountain High Enough – Guardians of the Galaxy

Ok, so it’s not strictly a Disney song, but Marvel counts, right? I had to include this one, as the adorable Isabelle is my second favorite Animal Crossing character. This duet with KK singing the main theme of Marvel’s Guardians of the Galaxy is simply adorable. I’ve seen a ton of these covers now, but this one takes things to a (ahem) new horizon? Sorry.

Please remember to check out each awesome creator on social media and tweet us your own designs! Animal Crossing: New Horizons has taken off like nothing else, and we want to see your Disney island, player, or outfit! Share your Animal Crossing Disney content today!