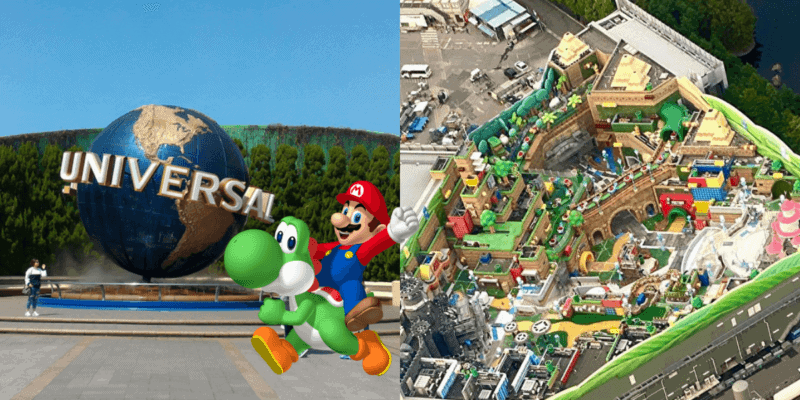 While Universal Studios Japan remains closed to guests, along with Tokyo Disney Resort, the Osaka-based resort appears to have made progress on its Super Nintendo World themed area. New photos have emerged that show that the project appears to be almost completed.

The photos were shared by themeparx.com and give us an areal view of the new land.

We can see that guests will be almost completely immersed in the classic video game world thanks to the tunnel entry and high walls and we can see the rides and landmarks beginning to take shape. We can also see that Super Nintendo World will be located right next to another highly-popular and extremely immersive area, The Wizarding World of Harry Potter.

Universal Studios Japan describes their Super Nintendo World on its website as the following:

Get ready to enjoy SUPER NINTENDO WORLD™ featuring the Nintendo experiences you know and love in a way you never thought possible.

The land’s interactive environments will seamlessly connect using state-of-the-art technology to create an innovative and immersive theme park experience for countless opportunities to discover the excitement of your favorite games.

Explore the area on the back of a Yoshi on this family-friendly adventure.

Take it to the next level with a Power Up Band* where you can keep score and stay connected while discovering a multi-level game area filled with one-of-a-kind challenges!

As you explore, you’ll discover punchable ? Blocks and many other iconic elements from your favorite Nintendo games. Explore, Discover and Play.

The update on Japan’s Super Nintendo World should get Universal fans excited for the second Nintendo-themed land already confirmed for the latest theme park being built at Universal Orlando Resort: Epic Universe. However, not much is still known about what Universal and Nintendo will create at the new theme park. Fans will have to wait a little longer as the global pandemic has now caused an indefinite hold on the construction of Universal’s Epic Universe.

To get people excited for Super Nintendo World, Universal Studios Japan and Nintendo teamed up with pop stars Galantis and Charli XCX to create a music video called “We are here to play.”

Are you excited for Super Nintendo World? Let us know in the comments!