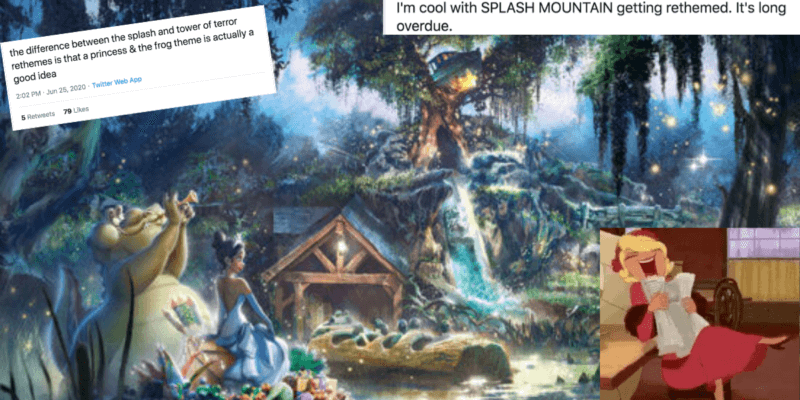 Disney Parks and Resorts just confirmed that the iconic attraction Disneyland and Walt Disney World attraction Splash Mountain will be re-themed from Disney’s controversial classic Song of the South to its beloved modern classic The Princess and the Frog.

While Disney announced this change with great excitement, a debate rages on Twitter among Disney fans about the changes happening to their favorite attractions. Most of the comments were directed towards other fans who have made a big deal out of this latest retheme but were, supposedly, silent for the previous re-themes and changes bestowed on Disney attractions over the years.

Here are a few examples:

All the people upset about this is hilarious. Pretty much none of the original Disneyland rides are still there. The park is always changing. Princess and the frog will fit in great there. I was upset when they changed tower of terror to guardian. But now it’s such a better ride. https://t.co/G646y9uGq2

I mean, there WAS an outcry when Tower of Terror got rethemed, you just didn't hear about it cuz it was mostly DisTwitter dweebs. It didn't reach the always-delightful Endless Culture Wars. https://t.co/fvK6dYnhQZ

It's so weird… I don't remember petitions and outrage when Maelstrom was re-themed to Frozen Ever After… or when Tower of Terror was re-themed to Guardians of the Galaxy Ride… or Mr. Toad's Wild Ride became The Many Adventures of Winnie the Pooh… or

I'm cool with SPLASH MOUNTAIN getting rethemed. It's long overdue.

As long as people are talking about re-themes, I hope they never do it to TWILIGHT ZONE TOWER OF TERROR (my favorite WDW attraction), but if they have to, this is how they should do it. https://t.co/zhuxqEZ6D8

People are making a big deal about Splash Mountain being redone because history etc etc. Where were you guys when Big Thunder Ranch was removed for Star Wars? Or when Nemo took over the submarine ride? Or when Tower of Terror was changed? What about Bug's Land?

Disney’s decision and its fans’ reactionary comments come after a heated debate raged on the internet that saw the two petitions made on Change.org: One directly asked Splash Mountain to be rethemed for Princess and the Frog, and a counter-petition asking that the attraction stay the way it is.

But if you asked Disney, specifically Walt Disney Imagineering, they would tell you that the retheming–or “plussing” as they call it–is an essential part of what they do.

They explained in their announcement,

The approach to retheming or “plussing” attractions (as Walt Disney referred to it) begins with Imagineers asking the question, how can we build upon or elevate the experience and tell a fresh, relevant story? It’s a continuous process that Imagineers are deeply passionate about. And with this longstanding history of updating attractions and adding new magic, the retheming of Splash Mountain is of particular importance today. The new concept is inclusive – one that all of our guests can connect with and be inspired by, and it speaks to the diversity of the millions of people who visit our parks each year

Walt Disney Imagineer Bob Weis spoke personally on the matter when he was asked why the decision was made to retheme instead of create a whole new attraction, saying:

“”We have a longstanding history of enhancing attractions with “new magic,” like Pirates of the Caribbean, and completely retheming others, like Guardians of the Galaxy – Mission: BREAKOUT! We completely understand that these decisions aren’t always popular, but I think our biggest fans know that we care as much as they do.”

Disney failed to mention when the transformation of Chik-a-pin hill will begin, but it was confirmed that both Disneyland Park and the Magic Kingdom will reopen to guests with the original Splash Mountain attraction.

What are your thoughts on Disney’s decision to change Splash Mountain? Let us know in the comments!