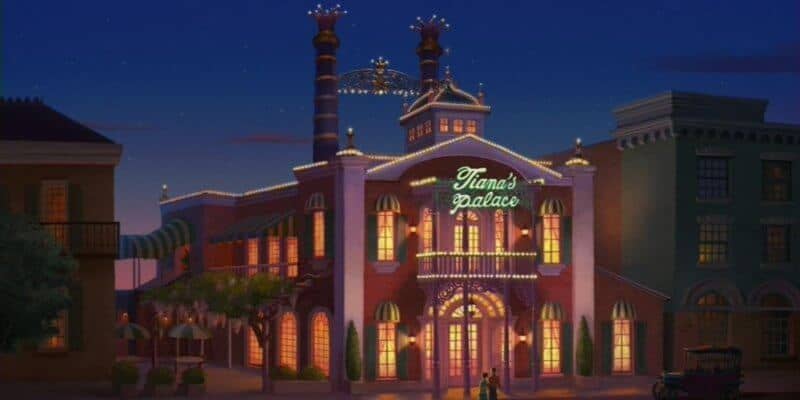 If there is one restaurant at which Disney fans are dying to get a reservation, this writer would say that it is not the California Grill, or O’hana’s, or Cathay Circle, or even Gusteau’s or Pizza Planet. It is Tiana’s Palace.

There’s just one problem: nobody knows when or where Disney will provide the new dining experience.

Disney Parks announced at 2019’s D23 event that a Princess and the Frog restaurant would be added to Walt Disney World’s newest hotel, Reflections — A Disney Lakeside Lodge. And using permits, we could deduce that construction of the restaurant was about to begin. However, keep in mind that we still didn’t know what the name of that restaurant would be.

But we have confirmation that Reflections was removed from the main list of upcoming announcements, its status, and that of Tiana’s restaurant are now in question.

The riverside restaurant from Disney’s The Princess and the Frog has been in high fan demand for a while and reached new heights when Disney announced that Splash Mountain would be re-themed after the animated classic.

“People keep asking me like I’m in charge of making the restaurant [at Disney],” Rose says with a laugh. “I’m like, ‘One thing at a time!’ But people are excited. That makes me feel good because it’s been 11 years since the movie came out. For people to still have a great, excited, motivated love for Princess Tiana and for the movie is really wonderful.”

Once the ride is complete, Rose says she’s right there with the fans about wanting to see a real-life incarnation of the film’s Tiana’s Palace restaurant realized.

“I’ve been looking forward to a Tiana’s Palace for years,” she says. “I agree with the fans that it would be great. I have dreams of them partnering with [New Orleans’] Café du Monde on some real deal beignets, having some fantastic shrimp and grits and king cake during Mardi Gras season. And the occasional second line through the joint … Basically all the things I love!”

Related: Is a Tiana’s Place Restaurant Coming Soon to Disneyland?

At this time is still no official word from Disney confirming or denying Reflections has been delayed or scrapped, and with the high fan demand, it is most likely a matter of “when” not “if” fans will get a Tiana’s Place or Tiana’s Palace. And there are more locations fit for such a restaurant. New Orleans Square at the Disneyland Resort seems like a perfect fit, and–while it has not been officially discussed–a waterfront location at Disney Springs could also serve as a suitable location.

But it will not be Tiana’s first restaurant on Disney property. Tiana already has a swinging joint called Tiana’s Place aboard the cruise ship the Disney Wonder.

We await official confirmation from Disney regarding the status of Reflections–A Disney Lakeside Lodge and its highly-anticipated restaurant.

Do you want to see Tiana’s Palace brought to life? Where do you think is the best location? Let us know in the comments!