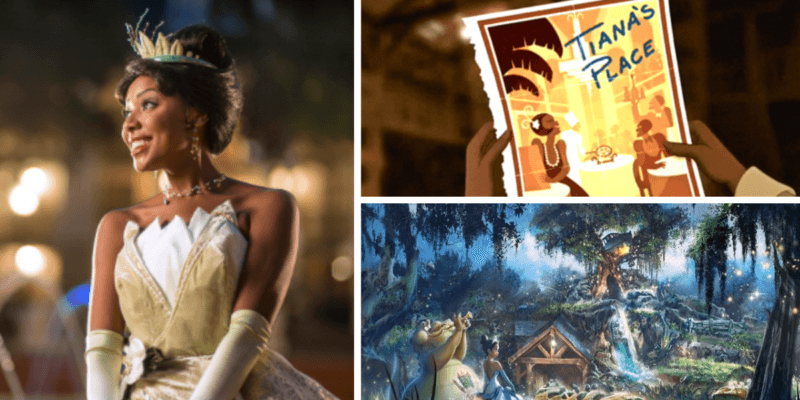 We feel like we travel to Louisiana every time we visit New Orleans Square in Disneyland. But now that Princess Tiana is getting her own attraction just around the corner with the retheme of Splash Mountain, many suspect it’s time to bring a The Princess and the Frog restaurant to the Happiest Place on Earth.

The actress who voices Princess Tiana herself, Anika Noni Rose, knows that fans want to see a Tiana’s Place restaurant brought to Disneyland to go along with the new Princess and the Frog attraction. In the original animated movie, Tiana dreams of opening her own restaurant, a goal of her and her father’s since she was very young. The restaurant was to be called Tiana’s Place, and by the end of the film Tiana’s dream comes true (in the form of a restaurant instead called Tiana’s Palace — she’s a princess, after all!).

“People keep asking me like I’m in charge of making the restaurant [at Disney],” Rose says with a laugh. “I’m like, ‘One thing at a time!’ But people are excited. That makes me feel good because it’s been 11 years since the movie came out. For people to still have a great, excited, motivated love for Princess Tiana and for the movie is really wonderful.”

Once the ride is complete, Rose says she’s right there with the fans about wanting to see a real-life incarnation of the film’s Tiana’s Palace restaurant realized.

“I’ve been looking forward to a Tiana’s Palace for years,” she says. “I agree with the fans that it would be great. I have dreams of them partnering with [New Orleans’] Café du Monde on some real deal beignets, having some fantastic shrimp and grits and king cake during Mardi Gras season. And the occasional second line through the joint … Basically all the things I love!”

So where could the Tiana’s Place restaurant go? Some have said that the Hungry Bear Restaurant located right across from Splash Mountain currently, and many think that the location’s proximity to the water and the ride make it an ideal fit for a new Princess and the Frog dining location.

On the other hand, since Disneyland currently has multiple dining locations located within New Orleans Square, many have proposed that Disney can retheme a restaurant like the French Market and turn it into Tiana’s Place. The Mint Julep Bar right next door would be the perfect place to sell Tiana’s famous beignets, and the stage where live music is often performed could be where Louis could play the trumpet.

It also wouldn’t be too far off base for a Princess and the Frog restaurant to come to the Happiest Place on Earth. The Disney Wonder already hosts Tiana’s Place, a New Orleans-style restaurant where Guests can feast on the famous gumbo and beignets — and where Guests are greeted by Tiana and Louis as they eat. Additionally, a dining location themed after The Princess and the Frog was announced for Walt Disney World last summer at D23 Expo.

Keep in mind that Disney hasn’t shared whether or not Tiana’s Place will be coming soon to Disneyland. So far, we know that in the future Splash Mountain will close for refurbishment to be rethemed to an attraction based in The Princess and the Frog at both Disneyland in California and Magic Kingdom in Florida.

Do you hope that Disney brings a Tiana’s Place restaurant to Disneyland? Where should the restaurant be located in the park? Let us know in the comments!