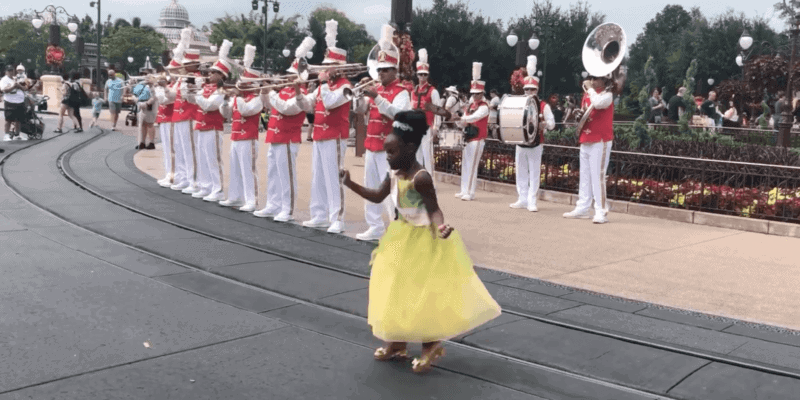 A little girl dressed as Princess Tiana recently wowed a crowd of Disney World guests with her incredible dance moves.

Everyone always dreams of traveling to Walt Disney World, the place where dreams come true, for their birthday. Well, for a special 8-year-old girl, her birthday wishes came true. For Sydney Elise Russell’s eighth birthday, her family took her to Walt Disney World, but she had no idea she would soon become a star in Magic Kingdom.

Her day started off at Walt Disney World’s Bibbidi Bobbidi Boutique where she had the makeover of her dreams. Her all time favorite Disney princess, Tiana, from “The Princess and the Frog,” was her inspiration and the Disney Cast Members transformed her into a mini Princess Tiana.

This year, instead of having a birthday party, we decided to celebrate Sydney’s birthday in Disney World. While she knew about the trip, she had no idea about her princess makeover at Bibbidi Bobbidi Boutique!

Once her princess makeover was complete, Sydney and her family headed over to the Magic Kingdom to meet some of the Disney princesses in person. While walking down Main Street U.S.A., Sydney heard some familiar music and decided to dance along.

In a recent interview with Good Morning America, Sydney’s mother, Dr. Tiffany McKinnon-Russell said “The band was playing music and they started playing ‘When We’re Human,’ from ‘Princess and the Frog.’ She just started dancing by herself and enjoying the music.”

You can see Sydney’s great moves in the video posted by Sydney’s mother on Facebook. You’ll notice a crowd quickly gathers around the show stopping 8-year-old girl as she danced along to the music. The video received more than 30,000 views on Facebook within two days.

“I knew she was going to seize the moment. I didn’t know it was going to be that big,” McKinnon-Russell stated.

And to top it all off, Sydney got to meet her idol, Princess Tiana, in person. “She was really happy to see somebody wearing her own dress and I told her all the things we have in common,” Sydney told Good Morning America. “I told her that I love to bake, my favorite color is green, and we’re both black,” she continued.

Part of why Sydney looks up to Princess Tiana is because they are both dedicated to their passion and she can relate to the Disney Princess. Sydney is an actress, dancer, and singer who has a website dedicated to her performances.

Sydney shared her advice for everyone out there who wants to pursue their dreams: “If you want to do something, just go for it.”

What do you think of Sydney’s dance moves? Let us know in the comments.