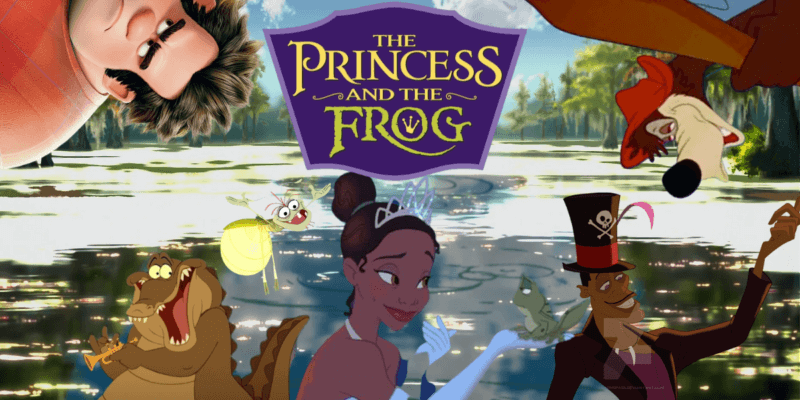 The Princess and the Frog remains one of Disney‘s most-beloved, yet often underrated, animated pictures, and it is notable for its introduction of the first Black Disney Princess: Tiana.

We’re all aware that Splash Mountain attraction at Disneyland and Magic Kingdom will be given a Princess and the Frog-themed facelift, but did you also know that Princess Tiana‘s design had to be changed by the team working on another Disney film due to fan backlash? Or that the film underperformed at the box office, perhaps due to a declining interest in 2D animation?

All of this will be explained, as we explore Disney‘s 49th animated classic. Come on, we’re “almost there!”

What is The Princess and the Frog about? 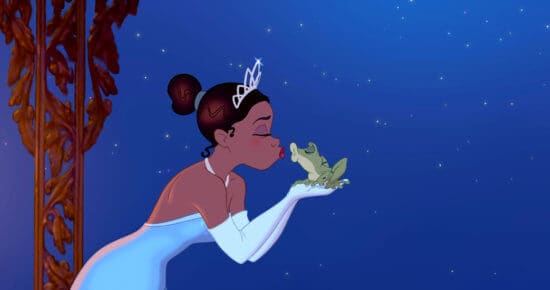 The Princess and the Frog was released in 2009 and was a return to the classic Disney princess formula after an underwhelming performance by the mouse’s 2008 animated feature, Bolt.

The film follows Tiana (Anika Noni Rose), a hardworking chef in 1926 New Orleans who dreams of opening her own restaurant. This goal gets turned upside down when she meets the charming yet arrogant Prince Naveen (Bruno Campos), who has managed to get himself transformed into a frog by the evil Dr. Facilier (Keith David), also known as “The Shadow Man.”

When Tiana kisses the frog in a moment of blind hope for funding her dream restaurant, she herself transforms into a slimy frog instead. Together, she and Naveen must restore themselves while meeting a cavalcade of colorful characters like Mama Odie (Jenifer Lewis), a trumpet-playing alligator Louis, and a lovesick firefly named Ray (Jim Cummings).

As you may have guessed, the film is a loose translation of the Brothers’ Grimm fairy tale “The Frog Prince,” though it’s closer in tone and plot to “The Frog Princess” by E.D Baker. It’s also a musical and features a collection of awesome songs by Toy Story composer Randy Newman, most notably; “Almost There” and ‘Friends on the Other Side.”

Related: Disney’s “Princess and the Frog” live-action remake possibly in the works

Reception for The Princess and the Frog

Why was The Princess and the Frog historic? 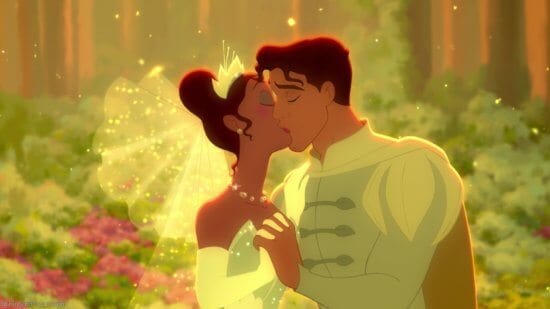 Marvel’s Black Panther was a landmark moment for the Walt Disney Company, but they’d actually started to promote more representation way back in 2009 with The Princess and the Frog. Tiana may not be the first Disney Princess of color, but she is the first Black Disney princess. (The first princess of color was Jasmine in 1992’s Aladdin, though her speaking voice was performed by a white voice actor.)

Tiana is performed by a woman of color in both voice and song, while the rest of the cast is equally diverse. The main cast including Prince Naveen, Tiana, and Dr. Facilier are all POC, while its actually the supporting cast who are mainly white, a balance that many Disney fans in 2009 found to be a refreshing change of pace.

The Princess and the Frog presents a cast of Black characters who — while not exactly realistic — are not considered to be outdated stereotypes based on “Uncle Tom” or “Jim Crow.” Creating a Disney Princess and a Disney movie that allowed Black people to see themselves as three dimensional characters may seem obvious and basic, but it was widely praised at the time as a new, inclusive way of making family movies.

However, that didn’t stop The Princess and the Frog from attracting its fair share of controversy.

Related: You Can Find Some of the Strongest Role Models at the Disney Parks 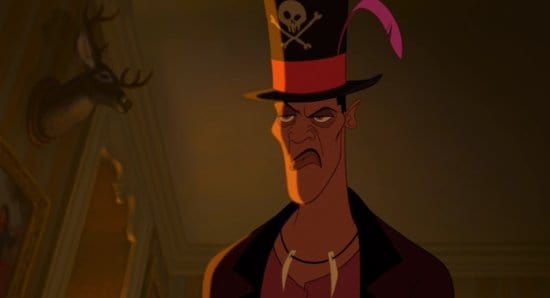 Before it even released there were questions raised about why the film was set in New Orleans, a place where many Black people were displaced to after the effects of Hurricane Katrina.

Some also took issue with Tiana’s original role and name — “Maddy” who was a maid to a white family — calling this initial portrayal offensive and stereotypical. Then, some took issue with the fact that Prince Naveen wasn’t clearly Black himself, to which Essence reported the public retort was, “What’s wrong with portraying multi-racial love?”

Dr. Facilier’s central use of voodoo equally turned some heads with potential racial implications, though this was ultimately largely accepted, as it’s pretty common for Disney films to have some form of magic in them in one way or another.

What was not widely accepted, however, was Tiana’s portrayal in a different movie.

Tiana in Ralph Breaks the Internet 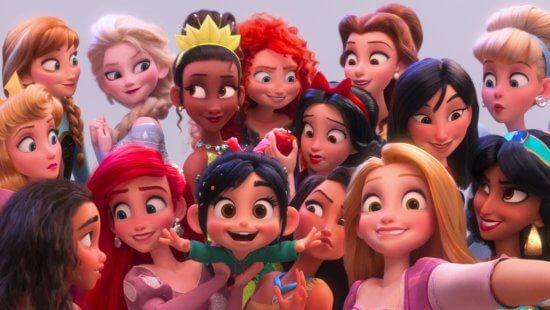 The Princess and the Frog again became controversial just under 10 years after its release with 2018’s Ralph Breaks the Internet, the sequel to Wreck it Ralph.

Tiana famously appears alongside every other Disney princess to give Vanellope some needed wisdom, and ultimately to save Ralph during the finale. Many took umbrage with Tiana’s design in the sneak preview clip that was released ahead of the film, suggesting that her skin tone was lighter and that her facial features were changed to be more typically white, a practice dubbed “whitewashing”

In response, Walt Disney Studios redesigned the princess in order to make her appearance closer to her depiction in the Princess and the Frog. The design team reportedly even bought on original actress Anika Noni Rose to approve the design. Check out this tweet from social group Color of Change from back in 2018;

The creation of Princess Tiana, @Disney's first Black princess marked a defining moment for how Black women and girls are presented in media, specifically in animated movies. We're glad @DisneyAnimation has committed to restoring Tiana to her original form to ensure authenticity. pic.twitter.com/O4LpuiQZSs

Related: “This Is Us” Star Niles Fitch is Disney’s First Live-Action Black Prince

Princess and the Frog and Splash Mountain

However, as any Disney fan will know, the current mixed opinions of the film that have recently emerged aren’t actually based on the silver screen, but rather the Disney Parks.

The Black Lives Matter movement that began years ago has surged in 2020, causing many to come forward and speak up about former works that have been deemed problematic or offensive. In recent years, discussions of diversity, representation, and racism have led to streaming services like Disney+ not offering certain content altogether, or providing content warnings to advise of potential stereotypical depictions or white actors voicing characters of color.

The 1946 dual live action-animated film Song of the South was one of the films in this firing line, as it is often deemed to be outdated and problematic by a large and vocal populous. It didn’t help that Disney has never even released the film on VHS — let alone Disney Plus —suggesting that the company doesn’t stand by the movie. Song of the South is also famous because it is the basis for Splash Mountain’s theming, though the ride notably removes all human characters and focuses its attention on the Br’er animals.

This culminated this spring in a widely circulated petition calling for Disney‘s Splash Mountain ride to be rethemed to be about Tiana and Princess and the Frog instead of Song of the South.

Fans quickly became divided on the idea of a retheming, and a petition to save Splash Mountain’s theming gained significant traction, though it was ultimately fruitless as Disney announced that Splash Mountain at the Magic Kingdom would indeed receive a Princess and the Frog-themed makeover, putting the first Black princess at the forefront of an attraction for the first time.

The Legacy of The Princess and the Frog

Now, it by no means tanked at the box office, but a worldwide gross of $267,000,000 on a budget of just under half of that isn’t exactly the return that you’d expect from a typical Disney film, especially when considering the additional cost of marketing which often doubles the film‘s overall budget.

Some put this down to systemic racism, though the mind-blowing success of the predominantly Black cast and crew’d Black Panther has bought this argument into question. Others suggest that a different form of prejudice took place: one against 2D animation.

Though 2011’s Winnie the Pooh carries the torch as the most recent 2D animated Disney feature, The Princess and the Frog is notable for being the last 2D Disney Princess movie. Since then, we’ve seen the likes of Tangled, Frozen, and Moana soar into the world of computer generated animation, though seemingly at the cost of bidding farewell to the style that made Walt Disney so beloved in the first place.

Whether or not another 2D Disney princess movie ever sees the light of day remains to be seen, though many maintain that The Princess and the Frog‘s underwhelming box office performance is to blame, as it spooked the Mouse into going with the more mainstream approach of key competitor Dreamworks.

Of course, the runaway success of Frozen likely did nothing to detract Disney from its opinion that 3D is the way to go, and it’s become the company’s MO ever since.

The Princess and the Frog: Certified Fresh on Rotten Tomatoes

Metacritic and Rotten Tomatoes currently give the film a 73 and 85 (out of 100), respectively. While neither site are by any means the definitive scoring system for movies, it suggests that The Princess and the Frog was mostly well-received by critics.

The movie is often hailed by fans as an underrated classic for its strong lead character and impressive diversity. Where many find it falls down, however, is what is perceived to be an overly complicated story and stuffed cast of characters that often makes it feel busy and unfocused.

Regardless of these criticisms, The Princess and the Frog is a charming and historic film in the Disney vault and one many believe deserves more attention for its own merits, as opposed to its numerous controversies.

What do you think of The Princess and the Frog? Let us know in the comments below.