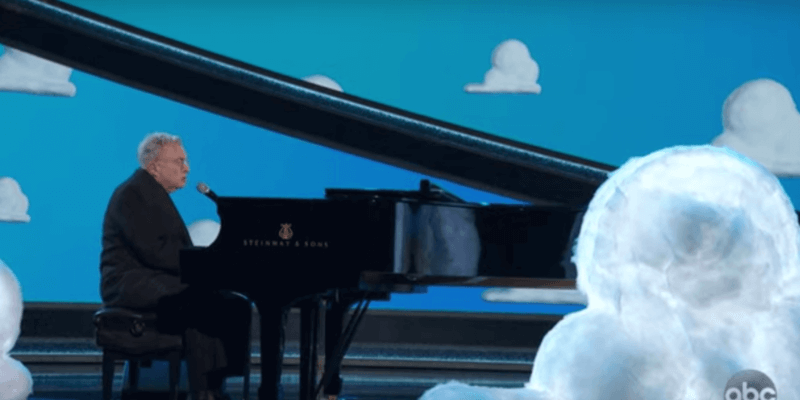 Randy Newman took center stage at the Academy Awards to perform his original song, “I Can’t Let You Throw Yourself Away” from the now-Academy Award-winning film Toy Story 4. Newman’s song is nominated for “Best Original Song” in the “Best Achievement in Music Written for Motion Pictures” category.

You can watch the video of Newman’s performance here:

While Newman’s song is meant to express Woody’s struggle to keep Forky from throwing himself away, the lyrics tell a very somber message in a very upbeat way. The song is a message to a friend, reminding him or her of everything he or she has to live for and affirming a dedication to not let him or her literally throw it all away. It is a message that transcends Disney movies to the real-life struggles of people trying so desperately to keep their friends going, remember what is so great about being alive, and not throw it all away.

But Randy Newman is not the only Disney voice to take the stage tonight. Just a few minutes earlier, Idina Menzel took the stage to do a jaw-dropping live performance of Frozen 2’s anthem “Into the Unknown.” Click here to watch the full video.

Singer/songwriter Randy Newman has provided the piano-led, blues-based songs and scores for every film in Pixar’s Toy Story franchise. Now, he is four for four with work on each film being nominated for an Academy Award.

Here are Randy Newman’s other Academy Award nominations thanks to the Toy Story films:

A Different Kind of Disney Song

When Randy Newman was brought on to do the songs and music for Toy Story, Pixar already put their foot down and declared that their movies were NOT going to be musicals. Instead, the songs would be sung in the background as part of the normal soundtrack to carry the story and convey the character’s thoughts without having the character actually sing.

Phil Collins would adopt this approach and take it to new heights when he was brought on to do the music for Disney’s Animated Action Film, Tarzan (1999).

The entire Toy Story franchise, featuring music from the great Randy Newman, is now available for streaming on Disney+.