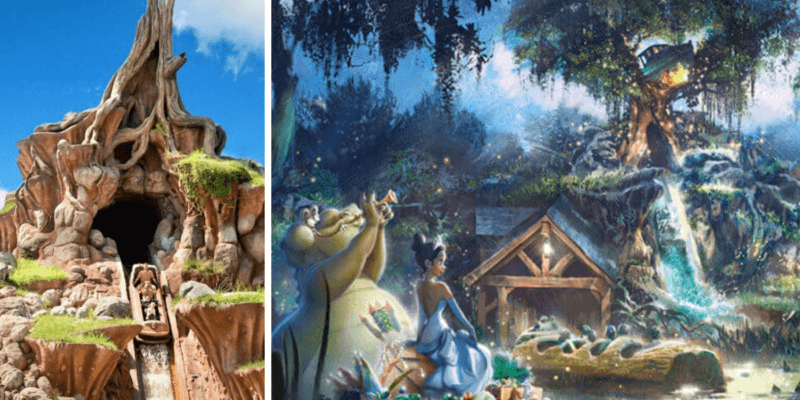 Disney announced a few weeks ago that the Splash Mountain attraction at Disneyland and Magic Kingdom will be rethemed to The Princess and the Frog. And now, the Disney Parks chairman is sharing his thoughts on the reimagining of the fan-favorite theme park ride.

In the initial reveal of Disney’s plans to retheme Splash Mountain, we found out that log flume attraction will still take us on an adventure, only this time we’re going down the bayou instead of to the Laughing Place. Led by Walt Disney Imagineering’s Charita Carter, the reimagined attraction will pick up the Princess and the Frog story after the final kiss. Guests will join Princess Tiana and Louis on a musical adventure – featuring some of the powerful music from the film – as they prepare for their first-ever Mardi Gras performance.

The announcement read, “For Imagineers, change is rooted in a tradition set by Walt Disney who encouraged new innovations, new ideas, new scenes and current storytelling. And the experiences they create can be enjoyed by guests who visit our parks from all over the world. As part of the creative development process, conceptual design work is well underway and Imagineers will soon be able to conduct preliminary reviews and develop a timeline for when the transformation can start to take shape.”

Even though Disney revealed the attraction news and concept art with much excitement and fanfare, the announcement was met with mixed responses. Some were on board with the retheme so Princess Tiana can have her own attraction, and other Disney fans were opposed to the notion of one of Disney’s “mountains” getting more than just a tune-up. And today, we’re getting a bit more background on the retheme from a Disney executive.

CNN: Disney announced it would be re-theming Splash Mountain into “The Princess and the Frog” from the controversial “Song of the South.” What role did the Black Lives Matter protests and conversations about race in recent weeks have in influencing the timing of the announcement?

D’Amaro: “We actually have been working on it for well over a year. In fact, I was a part of those conversations over a year ago. Listen, our stories evolve all the time. I mean, back from when Walt started Disneyland back in 1955, he stated that if we would continue to evolve our stories, that they’re never ending, that they’ll always be contemporary. And I think that that’s what you’re seeing with Splash Mountain.

I keep using the same word, but I’m really proud of this team and what we’re doing on this front. I think Splash Mountain, no doubt, is a sacred attraction to many of our guests. And I think you’re going to love what we’re doing in making the attraction even more contemporary.”

We’ll continue to stay up-to-date with the latest news on the Splash Mountain retheme — and we can’t wait to find out the attraction’s new name as soon as it’s announced! For now, keep in mind that Splash Mountain is currently open at Magic Kingdom, and Disney has not yet announced when the attraction will close at Disneyland and Disney World. So whether you’re planning on taking a Disney vacation to California or Florida, you’ll still have the chance to experience the ride before it is rethemed.

What do you think of Josh D’Amaro’s take on the Splash Mountain retheme? Are you a dedicated Disney fan who agrees with the change to represent The Princess and the Frog? Or do you think Splash Mountain is a classic and you want the ride to stay the same? Let us know in the comments!

Click here to book your next trip to the Disney Parks with the Authorized Disney Vacation Planners at Academy Travel!