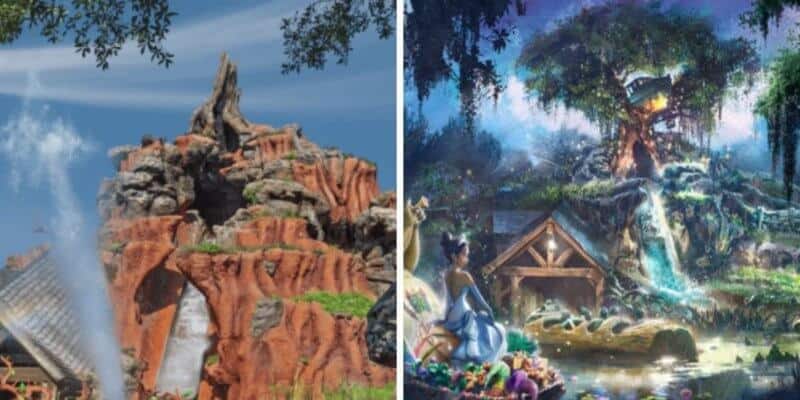 The Walt Disney Company is continuing to celebrate and incorporate diversity into the Disney Parks, including with the recently announced complete retheme of Splash Mountain into a Princess and the Frog ride.

And next week, we will be getting a first look at the inspiration behind the Splash Mountain retheme!

When the retheme was first announced, we got a look at the concept art (seen above) for the new The Princess and the Frog theming, but next week, it looks like we will be getting to see even more of what Guests can expect on the new ride!

My News 13 journalist, Ashley Carter, took to Twitter to share that Disney commissioned New Orleans-based artist Sharika Mahdi to create a series of paintings as inspiration for Disney Imagineers for the Splash Mountain retheme into The Princess and the Frog. But the best part is Disney will share a first look at one of the paintings next week:

A tidbit about the Princess and the Frog revamp of Splash Mountain: Disney commissioned New Orleans-based artist Sharika Mahdi to create a series of paintings as inspiration for Imagineeers developing the attraction. Disney will share a first look at a painting on August 23.

A tidbit about the Princess and the Frog revamp of Splash Mountain: Disney commissioned New Orleans-based artist Sharika Mahdi to create a series of paintings as inspiration for Imagineeers developing the attraction. Disney will share a first look at a painting on August 23.

At this time, we do not have a date as to when Disney will make these changes to Splash Mountain at Disneyland and Disney World, but Melissa Valiquette, Vice President of Magic Kingdom recently stated “When we are reimagining a new attraction or area, this can be a lengthy process”, indicating it could be some time before we see Tiana take over Splash Mountain.

Are you excited for the revamp of Splash Mountain? Let us know in the comments below.