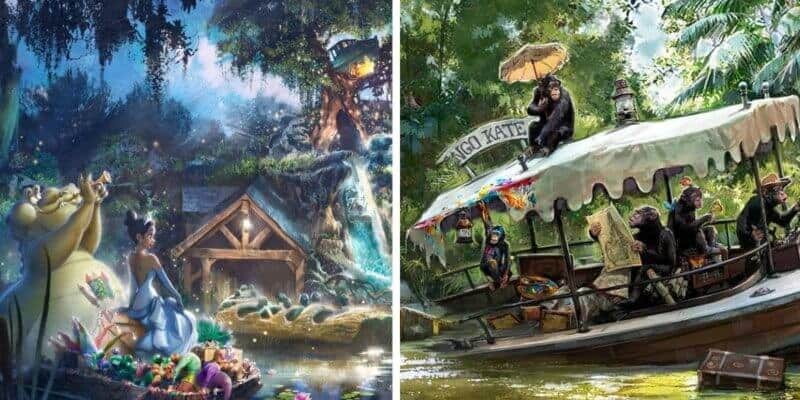 The Walt Disney Company is continuing to celebrate and incorporate diversity into the Disney Parks, including with the recently announced complete retheme of Splash Mountain into a Princess and the Frog ride as well as a reimagined version of the classic attraction Jungle Cruise.

These changes will be taking place at both Magic Kingdom at Walt Disney World in Florida and Disneyland park in Disneyland Resort in California.

If you are ready to book a Disney vacation, click here!

As part of Imagineering’s longstanding history of enhancing attractions with new magic, she not only seeks to tell stories that are inspiring and enlightening but ones that are relevant and makes all guests feel welcomed.

Among her responsibilities, Carmen, with the support of a team of highly respected cultural advisors from around the world, is involved in development of two upcoming Disney park attractions – the reimagining of Splash Mountain to a theme inspired by an all-time favorite animated Disney film, “The Princess and the Frog” and enhancements coming to Jungle Cruise that build on the beloved story of the iconic attraction.

“We create experiences that make people feel welcomed, seen and heard, and let them know that their stories are important,” she shared when we got a chance to speak with her. […]

During the Disney Parks Blog video, Smith expressed what her responsibility is as part of the Walt Disney Company and how she feels about the Splash Mountain retheme:

“My work is really about collaboration and teamwork. You create experiences that will make people feel welcome, seen and heard and to let them know their stories are just as important. My responsibility is to look at what do we have now and does it resonate with our Guests and making them more reflective of the world we live in.

When we looked at Splash Mountain, it gives our company an opportunity to showcase our first African-American Princess. We need to be able to tell stories that are inspiring and enlightening but also that speak to a community that has not been well-represented in our Parks and Resorts.”

Smith went on to discuss the additions coming soon to Jungle Cruise as well, saying:

“Plussing and re-imagining the experience in Jungle Cruise was, to us, a unique opportunity to basically tell a story that does not perpetuate any stereotypes and to make sure that it’s reflective of our Guests in a very positive way, but it also gave us an opportunity to salute the Skippers that are critical to the experience that our Guests have.”

More on the Splash Mountain Retheme

In June 2020, Disney made a huge announcement that had fans talking. After a petition coincidentally made its rounds on the internet, Disney Parks announced that the classic theme park attraction Splash Mountain — which opened in the late ’80s and early ’90s at the California and Florida theme parks — would be rethemed to the 2009 Disney Princess animated movie The Princess and the Frog. Again, this retheme will be taking place at both Magic Kingdom in Walt Disney World and Disneyland park in Disneyland Resort.

Disney shared the following information on why this ride is undergoing these changes:

More on the Jungle Cruise Reimagining

It wasn’t long ago that Disney Parks made a huge announcement regarding a retheme of some of the scenes in the iconic ride, located at both Disneyland and Walt Disney World. The fan-favorite theme park attraction will soon tell a brand-new story called Rivers Journey.

The new version of the attraction is part of Disney’s efforts to tell diverse, inclusive stories across the theme parks.

Disney Parks Blog shared that the company is “building on the story of the Jungle Cruise at both Disneyland park at Disneyland Resort and Magic Kingdom park at Walt Disney World Resort to include new adventures that stay true to the experience we know and love — more humor, wildlife and skipper heart — and also reflect and value the diversity of the world around us.”

At this time, we do not have a date as to when Disney will make these changes to the Jungle Cruise and Splash Mountain attractions at Disneyland and Disney World, but Inside the Magic will keep you updated as we get information.

How do you feel about these changes? Let us know in the comments below.