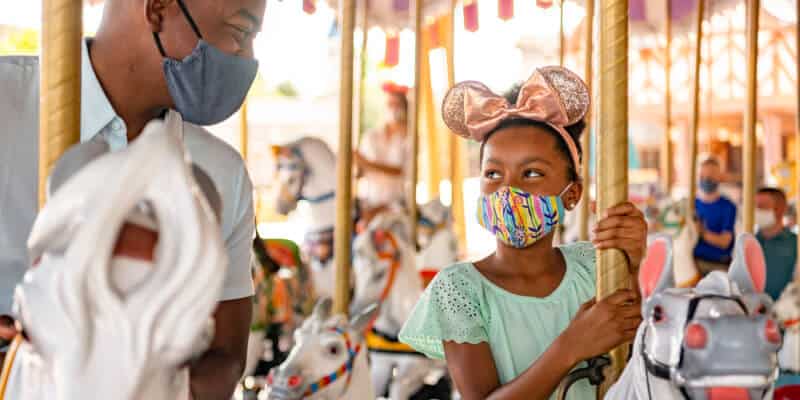 The Walt Disney World Resort theme parks have begun a phased reopening, with today marking the official reopening day of Magic Kingdom and Animal Kingdom. But with the reopening of the parks amid the spread of the pandemic across the state of Florida comes questions and criticisms from within the Disney community and outside it.

Frank Pallotta of CNN Business spoke with Disney Parks, Experiences, and Products Chairman Josh D’Amaro (formerly the Walt Disney World Resort President — and the Disneyland Resort President before that). He asked the chairman about the decision to reopen Disney World, and like other Disney officials, D’Amaro said that Disney is ready to reopen safely.

“We are in a new normal,” D’Amaro said to CNN. “The world is a different place, but we feel really prepared to operate in this new environment.”

Currently, the Disney Parks in Florida (and, once they reopen, the Disney Parks in California) have strict health and safety measures in place for the well being of Guests and Cast Members. Temperatures are checked, masks are mandatory for everyone ages two and up, social distancing is regulated within dining locations and attraction queues, and reservations are required in order to limit the number of people in the parks.

One of the most pressing questions on the public’s mind (be it from dedicated Disney fans and Annual Passholders, or those who don’t frequent the parks) is, why is Disney deciding to reopen the Disney World theme parks right now, as the pandemic surges in Florida?

Here’s what D’Amaro had to say:

“We are in a new normal right now, so what’s happening outside of the gates of Walt Disney World is our new world. I think you know we were one of the first theme parks to close, and we’ll be about the last to open. And we spent every minute of every day thinking about how to operate in this new normal that we’re in.

I’m exceptionally proud of this group in terms of what they’ve put together from a protocol perspective and being able to open in a phased and really responsible way. I had a chance to walk Main Street just a few minutes ago. It feels really good in the park. So yeah, the world is a different place, but we feel really prepared to operate in this new environment that we’re in.”

Additionally, Pallotta asked D’Amaro about his response to the criticism The Walt Disney Company has faced in reopening the Disney World theme parks. He answered with the following statement, reiterating his confidence in Disney’s plan:

“I can understand people’s criticisms, but again, I am incredibly confident about where we are from an operations perspective. And when guests are ready to come, they can come. It’s their choice. We will be ready and open for business and ready to make that magic that we always make.”

We hope everyone who plans to visit Disney World has a magical trip and abides by the health and safety guidelines Disney has set in place for the well being of all Guests and Cast Members.