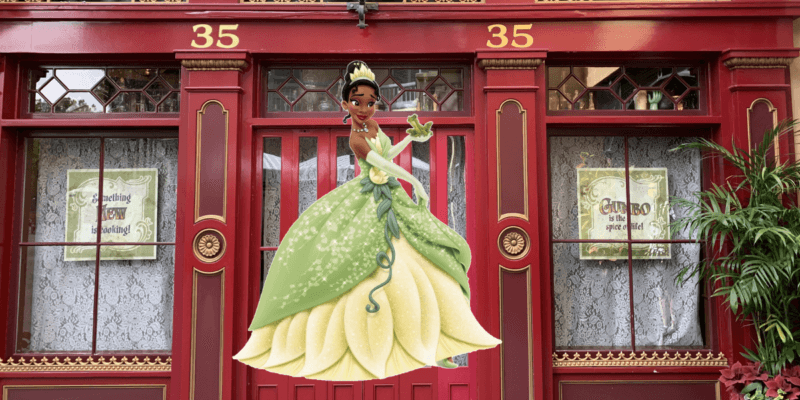 Disneyland is officially reopened! While it is exciting to see Disneyland welcome Guests again for the first time in over a year, it looks like Dinsey has even more excitement up its sleeve for fans!

All we can say is… we hope there are beignets involved!

New Orleans Square is a beloved part of Disneyland, home to the Pirates of the Caribbean attraction, the Blue Bayou restaurant, and lots of beignets! As if New Orleans Square couldn’t get any more perfect new signage hints that something involving The Princess and the Frog may be going into Le Bat en Rouge, a shop that previously housed clothing from Disney’s Dress Shop merchandise line.

Disney has not confirmed any notion of a Princess and the Frog-themed addition coming to New Orleans Square — But take a look at these photos that state something new is coming soon!

Set a Table! Set a Stage! Dress the Part! Start A Rage!

Something NEW is cooking!

Gumbo is the spice of life!

Givin the Splash Mountain retheme, it would be great to see the film have an even bigger presence in Disneyland. As The Princess and the Frog is set in New Orleans is makes sense for the IP to be included in that area of the park.

In the film, The Princess and the Frog, Tiana achieves her dream of opening her own restaurant, Tiana’s Palace at the end of the movie. How awesome would it be to see Tiana’s dream realized in the park? Tiana’s Palace is already featured on Disney Cruise Line, and there have been plans to bring it to Walt Disney World as well.

Related: Most Disneyland Attractions Were a Breeze on Reopening Day!

There has recently been a lot of speculation that Tiana’s Palace would be coming to Disneyland but never any confirmation from Disney. The wording and colors of the signage in New Orleans Square does seem to point towards a dining location of some kind, so we will keep our fingers crossed and wish on the evening star for a Princess and the Frog dining location dream to come true!

As of right now if you are a fan of The Princess and the Frog, you can catch Princess Tiana at both Disneyland and Walt Disney World, and enjoy Tiana’s Palace onboard the Disney Cruise Line’s Disney Wonder.

Related: Disneyland Ride Queues Are Shorter Than They Seem

What do you think Disney is going to add to New Orleans Square? Let us know in the comments!

Want to book a vacation to the Disneyland Resort? We can help! Click here for more information.