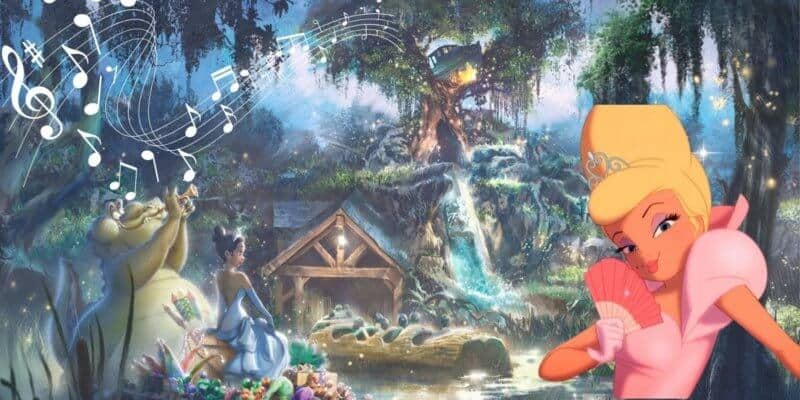 Last summer, Disney Parks announced that the classic attraction — Splash Mountain — at both Walt Disney World and Disneyland would soon be rethemed to the 2009 animated film, The Princess and the Frog.

The announcement came just a few days after a petition made its round on the Internet asking for exactly this. However, it is important to note that Disney said that this project is something that has been in the works for quite some time now.

Splash Mountain Retheme to The Princess and the Frog

Though we do not have an exact timeline for when the project will begin at Magic Kingdom or Disneyland Park, or any additional details on what exactly the retheme will entail, here’s what we do know so far.

In Disney’s original announcement, they gave a small snippet of what storyline the ride will follow.

So, thanks to this tidbit of information, we know that the story of the attraction will take place after the film’s ending as Tiana and Louis prepare for a Mardi Gras performance!

What Can Guests Expect With Tiana’s New Ride?

With all of that being said, we are beginning to wonder — what songs could we hear from the movie, or will the attraction have a brand-new soundtrack? Will the ride have a theme song, similar to “Zip-A-Dee-Doo-Dah” on Splash Mountain, or will we hear a mix of different songs throughout the attraction? Will we get brand-new songs specifically for the ride?

And in regard to characters, will Guests encounter Tiana’s best friend, Lottie, or maybe even the frog hunters? Of course, the ride wouldn’t be complete without Mama Odie or Prince Naveen, so we hope to see them incorporated somehow! And maybe we could even meet brand-new characters that we have never met before.

Well, here is what I think could Guests can expect with the new retheme at Walt Disney World and Disneyland. Keep in mind that these are my personal predictions and hope for the new ride, and we still wait for more specific details from Disney!

During the Investors Day 2020 event, Disney announced exciting news for Disney’s streaming service — Disney+ — including some of our favorite heroines getting their very own spotlight series. One of the characters getting her own show is Princess Tiana.

Disney shared that the upcoming Disney+ show will feature Tiana and her friends for all-new stories in a new musical comedy series. The last we saw Tiana, she was just married to Prince Naveen and the duo was building Tiana’s restaurant, making her dreams come true and now fans will find out what she’s been up to.

With that being said, Disney has now shared that both the upcoming Tiana-themed ride and the upcoming Tiana series on Disney+ will both pick up after Tiana and Naveen get married and share their final kiss. So, could the new Disney+ series set up storylines, music, and characters to be incorporated into the upcoming ride at Disney World and Disneyland?

It’s a possibility, though nothing has been confirmed by Disney at the time of publication.

New The Princess and the Frog Songs

As I asked earlier, one question that has been top of mind for me, personally, is whether there be one main song throughout the entire ride, similar to “Zip-A-Dee-Doo-Dah” for Splash Mountain, or will we hear a mix of different songs in each scene.

If we get one main song — how amazing would it be if we get a brand-new one? One designed specifically to tell the story of the attraction. On the flip side, Disney could be creating a soundtrack specifically for the ride as well, that includes a variety of songs that play throughout the attraction. “Dig a Little Deeper,” “Almost There,” “When We’re Human” are a few that I would love to see incorporated throughout different scenes in the new ride at Disneyland and Magic Kingdom.

New The Princess and the Frog Characters

Along with the possibility of new songs, Disney could introduce new characters to us as well. As we go through the attraction and watch the Mardi Gras performance, we could see additional New Orleans residents added, new customers Tiana has built a relationship with, and maybe even more friends from the bayou!

There are so many possibilities with this new storyline that I suspect we see many characters — both from the film and perhaps the brand-new series coming to Disney+.

Please keep in mind this article is pure speculation and Disney has not confirmed these details. At this time, we do not know when Disney will be making any changes to Splash Mountain, or when the new Tiana-themed ride will debut, but Inside the Magic will keep you updated as we get information.

Want to book a trip to Disney World or Disneyland? Get started here!

What would you like to see the new Tiana ride include? Share your ideas in the comments below!