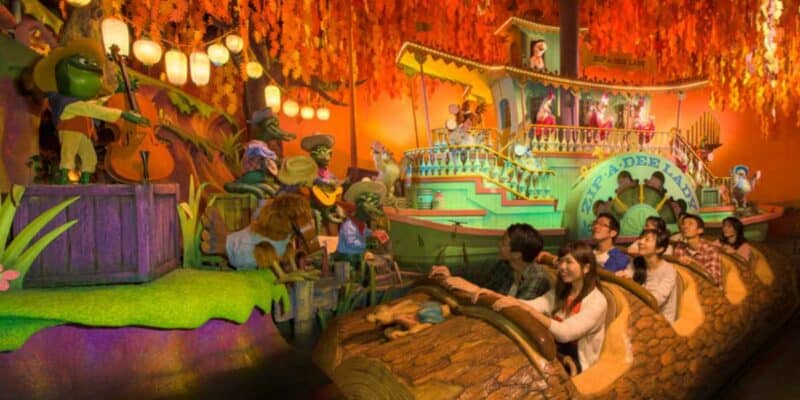 There isn’t a week that goes by that the famed Disney Parks attraction Splash Mountain doesn’t strike up some form of debate or discussion within the fandom, mostly around the imminent arrival of Princess Tiana.

Now, the water-based ride, found in three theme parks worldwide, is causing even more disruption as a new announcement has just been made regarding the fate of one Resort’s attraction amid Bob Iger’s return.

The Tokyo Disney Resort celebrates 40 years next year. As the first Disney Park opened outside of the United States, Tokyo Disneyland is a historic part of The Walt Disney Company’s 100-year story. Wholly owned by The Oriental Land Company, and under creative direction from Disney, the Disneyland Park in Japan is similar to its US and European counterparts. With lands like the World Bazaar, Westernland, Fantasyland, Tomorrowland, and Adventureland, the Disney Resort features many popular attractions like Cinderella Castle, Space Mountain, Peter Pan’s Flight, and Splash Mountain. But unlike other Resorts, Tokyo’s second gate Tokyo DisneySea, cannot be found anywhere else.

But what can is the paid-for “FastPass” service.

The Disney Premier Access service at Tokyo Disney Resort works slightly differently than other similar systems like Disney Genie+ at Walt Disney World Resort and Disneyland Resort, and the version of Premier Access found at Disneyland Paris. The latter consists of a pay-per-ride option as well as an all-in-one ticket that allows access to each ride offered once throughout the Guest’s day ticket at the theme park.

At the Urayasu, Chiba Parks though, there are only a handful of attractions using the Disney Premier Access system, but a new announcement suggests that The Oriental Land Company may be moving to roll it out Park-wide in the coming months. Tokyo Disneyland and Tokyo DisneySea currently only offer three attractions for Disney Premier Access as well as the new Fantasmic! replacement show, Believe! Sea of Dreams found in DisneySea’s Mediterranean Harbor.

But a new update has revealed that another four attractions spread across both Disney Parks will be joining the service. Tokyo Disney Resort quietly revealed the upcoming change on its official website. It reads:

・The Happy Ride with Baymax
Disney Premier Access will be available for purchase from December 1, 2022.

・Splash Mountain
Disney Premier Access will be available for purchase from December 1, 2022.

When Splash Mountain enters into the Disney Premier Access system on December 1, it will cost Guests at Tokyo Disney Resort’s Disneyland 1,500 Japanese yen (approx. $10.80). The same will be the case for The Happy Ride with Baymax. At this time, Enchanted Tale of Beauty and the Beast in Fantasyland will remain at 2,000 Japanese yen (approx. $14.40)

Over at Tokyo DisneySea, the new offerings will include the Tower of Terror located in the American Waterfront land, and Mysterious Island’s Journey to the Centre of the Earth. Both of these will cost the same as Splash Mountain — 1,500 Japanese yen. DisneySea currently utilizes the Disney Premier Access for Soaring: Fantastic Flight and Toy Story Mania!, which cost Guests an additional 2,000 Japanese yen, and the new nighttime spectacular, Believe! Sea of Dreams, which will set Guests back 2,500 Japanese yen (approx. $17.99).

It will be interesting to see if Tokyo Disney Resort opens more attractions up to Disney Premier Access, and whether, once it opens, the new Fantasy Springs land will utilize the paid option. Fantasy Springs will bring Peter Pan, Tangled, and Frozen-themed areas to DisneySea in an expansion that will also include the debut of new attraction experiences.

The change in Tokyo comes amid the shocking return of former CEO Bob Iger to take the reins of the House of Mouse after the ousting of his successor, Bob Chapek. Many Disney fans are waiting with bated breath at what Iger may undo from Chapek’s leadership. One of those changes was the divisive rebranding of Splash Mountain in the domestic Parks from its Song of the South (1946) theme to one inspired by The Princess and the Frog (2009), called Tiana’s Bayou Adventure.

Have you used one of Disney’s paid “FastPass” services yet? Let us know in the comments down below!