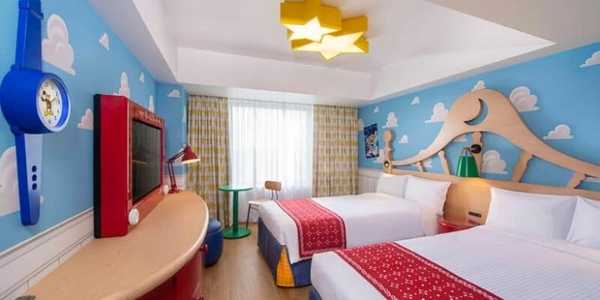 When Guests visit the Disney Parks, there is so much to see and do. One of the best things about each Disney Resort is that not only are the theme parks something to marvel at but so are the Resorts.

At Walt Disney World Resort, Guests can choose from over 25 differently-themed Resorts, all varying in price points. You can live in luxury at Disney’s Grand Floridian Resort, jump into the movies at Disney’s All-Star Movies Resort, and so much more. When we go internationally, the amount of Resorts will shrink, but the theming does not.

According to their website, Tokyo Disneyland (Tokyo Disneyland and Tokyo DisneySea) has announced that their newest Resort, the Toy Story Hotel, will open on April 5, 2022, after having been delayed due to the pandemic.

Thankfully, we now have a sneak peek at what to expect once Andy’s bedroom comes to life next month! 東京ディズニーリゾートPR【公式】(@TDR_PR) took to Twitter to post a video of the hotel, which looks like a color-filled masterpiece. There has never been a better place to feel like Woody or Buzz Lightyear!

Explore the hotel with toy size! Fun movie release /
We have released a video of a hotel tour that goes around #東京ディズニーリゾートトイストーリーホテル in the size of a toy.
Let’s become a toy and infiltrate!
＞＞ http://tdr.eng.mg/64f5a

From themed hallways to elevators, this hotel will surely transport Guests into the wonderful world of Pixar.

The site continues to note:

From the moment a guest arrives at this hotel, the view spreads as if it had shrunk to the size of a toy. Buzz Lightyear and Jesse in the square in front of the hotel entrance, and Woody and Bo-Peep in the courtyard Toy Friends Square, each with a character statue of about 4 meters, guests You can enjoy the experience as if you were in the world of toys.

The lobby is full of colorful toy motifs, with floor patterns that imitate large puzzle pieces and ceilings with game boards.
The guest rooms are inspired by Andy’s room, which appears in the first movie of the “Toy Story” series, and are reminiscent of toys, such as wallpaper of blue sky and white clouds and a large Mickey Mouse watch hung on the wall. And furnishings are placed here.

“Tokyo Disney Resort Toy Story Hotel” is positioned as a moderate type between the deluxe type and the value type, and has unified the design of 595 guest rooms. By specializing in the facilities and simple services required for accommodation, you can enjoy your stay more easily than a deluxe type Disney hotel.

At Disney Hotels, we will provide a richer resort stay and offer new options for experiencing the enjoyment of Disney by enriching hotels that meet the various needs of many guests.

In total, there will be 595 rooms for Guests to enjoy, with some of those rooms being a “superior” room for those who would prefer an upgrade. On top of the stunning theming, there will also be a Lozzo Garden Cafe, Gift Planet (Disney Shop), Slinky Dog Park, Toy Friends Square, and so much more.

With an all-new hotel that represents Pixar’s most popular and successful franchise, booking a trip to Tokyo Disneyland is next on our bucket list!

What do you think of the all-new Toy Story hotel? Let us know in the comments below.