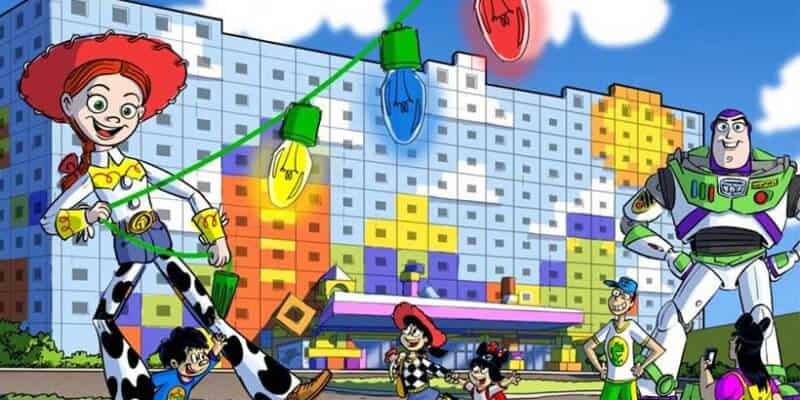 In 2018, it was announced that a brand-new hotel would be coming to Tokyo Disney Resort themed around the ever-popular Pixar film — Toy Story.

Now, three years later, we finally have a look at some concept art revealed as well as a target opening date, courtesy of Tokyo Disney’s website!

We already knew that much like Toy Story Land at Walt Disney World, Shanghai Disneyland, and Hong Kong Disneyland, the hotel is going to be designed to look like everything is built from toys — Just like Andy would do! By doing so, it will help Guests be fully immersed and feel as though they are the size of a toy playing with Andy’s friends, including Jessie and Buzz Lightyear!

The Guest rooms are modeled after Andy’s bedroom and will be filled with colorful furniture and other immersive details inspired by Pixar’s Toy Story films.

Now, Tokyo Disney Resort took to their website to share the amazing concept art (seen above), showing Jessie and Buzz Lightyear in what looks to be the front of the hotel. The building itself looks like it is made out of toys (possibly LEGOs) as kids are seen playing around and Guests are taking photos in front of the giant Toy Story character statues.

We also now know that the hotel will open up in 2021 and will be officially called Tokyo Disney Resort Toy Story Hotel!

We are pleased to inform you that the name of the fifth Disney hotel in Japan, which is scheduled to open in 2021, has been decided as “Tokyo Disney Resort Toy Story Hotel”.

With the theme of the Disney & Pixar movie “Toy Story” series, this hotel is studded with ingenuity to feel the world of toys in various places such as the exterior, entrance, and lobby.

It is the first Disney hotel in Japan to be positioned as a “moderate type” *, and guests will be able to newly select a hotel between the deluxe type and the value type. By unifying the specifications of the 595 guest rooms and specializing in the facilities required for accommodation, you can enjoy your stay more easily than a deluxe type Disney hotel.

At Tokyo Disney Resort, we will not only introduce new facilities such as Tokyo DisneySea’s new theme port “Fantasy Springs” (scheduled to open in 2023), but also enhance hotels that meet the various needs of our guests. We will enrich your stay at the resort.

Tokyo Disney’s Toy Story hotel will be the second Toy Story-themed hotel at the Disney Parks, joining Shanghai’s version (pictured above) which features playful rooms inspired Woody, Buzz Lightyear, Jessie, and the rest of the gang.

Are you excited for when the Tokyo Disney Resort Toy Story Hotel debuts? Let us know in the comments below.

Do you want to plan a trip to Tokyo Disney? Get started here!

Comments Off on First Look at ‘Toy Story’ Hotel Debuting This Year!