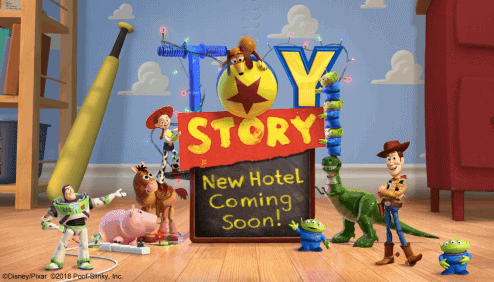 Get ready for another new way to have fun with our “Toy Story” pals at Disney Parks! A new Toy Story-themed hotel is coming to Tokyo Disney Resort, announced Oriental Land Co., Ltd.

The new hotel is described as family-friendly and affordable, and it’s projected to open in fiscal year 2021, which is sometime between April 1, 2021, and March 31, 2022. Much like Toy Story Land at Disney Parks, the hotel will be designed to look like everything is made of toys. The guest rooms are modeled after Andy’s bedroom, filled with colorful furniture and other immersive details inspired by Disney-Pixar’s “Toy Story” films. The rooms will have standard amenities.

In addition, the yet-to-be-named hotel will feature a restaurant, a Disney shop, parking, and more. Guest rooms and amenities will be spread across 11 floors.

Here’s the “background story” on the hotel from Oriental Land:

Andy, the little boy who loves his toys – Woody, Buzz Lightyear and the rest – has embarked on the ultimate backyard project: a building to house all his toys. When Andy is called away by his mom, his toys and their helpers take over the “toy” tower and open it as a hotel for all the “honorary” toys of the world.

There’s certainly a lot to look forward to at Tokyo Disney Resort in the next few years, and with the addition of the new Toy Story hotel, guests can “enjoy a casual resort stay at a reasonable price,” says Oriental Land.