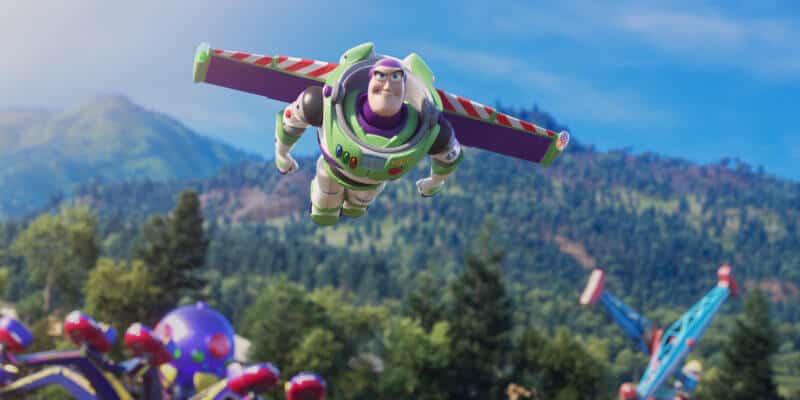 From “Toy Story” to “Toy Story 4,” Pixar has evolved in more ways than one since the studios’ very first film. Since “Toy Story” was first released in theaters in 1995, Pixar Studios has been acquired by The Walt Disney Company, produced 20 films and dozens of shorts, and created countless stories that have won over the hearts of people of all ages. “Toy Story” has evolved significantly between the first and the fourth film in the series, but even with advances in animation, technology, and resources over the past two decades, the story of Woody, Buzz, and the rest of the gang is still one we know and love.

Inside the Magic recently had the opportunity to sit down Bill Reeves, global technology supervisor, and Bob Pauley, production designer, of “Toy Story 4,” who shared some insight on Disney-Pixar history and how the studios’ first film, “Toy Story,” evolved to become “Toy Story 4.”

When we think of “Toy Story,” Woody and Buzz come to mind no matter what. But the two most recognizable characters from the film series weren’t always who they are today. Woody and Buzz were once a ventriloquist dummy and an astronaut hero called Lunar Larry, and as you can imagine, those two character’s didn’t really stick. They evolved to become the two lead characters in a story about a beloved old-fashion cowboy whose life is upended by the arrival of the latest and greatest toy. “It became a classic buddy movie,” said Reeves. The two toys have to learn how to live and work together.

Reeves shared that the team knew they had a good story when they pitched “Toy Story,” and the story itself is the most important element of Pixar films. “Story is king in Pixar,” said Reeves. “It’s key and vital to all our films. Without a good story with engaging characters, no amount of design or technology built will matter at all.”

But a good story isn’t enough to create an animated classic. The Pixar team had a great story to tell, but they faced a number of challenges along the way. Not only were there design challenges; it would also be the first feature film for Pixar, and, Reeves admits, in many ways, the team didn’t know what they were doing. The animation team grew from three people to over 50, and every other team grew exponentially, as well, in order to produce “Toy Story.” And even with a larger team, Pixar was still limited in its capabilities in animation when producing “Toy Story” compared to what the studios could do when making “Toy Story 4” over two decades later. In fact, the main reason why the first Pixar film was based on toys as characters is because toys, specifically plastic toys, were the most efficient to handle when rendering animation.

“Toy Story was a struggle between having rich and believable characters and environments versus fitting in the box of the tools, the budget, and the release date of the film. We were essentially designing within the restrictions that we had,” Reeves shared.

And as you can see, the “Toy Story” films were brought to life more and more realistically as animation technology advanced over the years. There wasn’t much of a difference in the look and feel of “Toy Story” and “Toy Story 2” since the films were released only 4 years apart from each other. But by the time “Toy Story 3” hit theaters in 2010, 11 years after the second film in the series was released, there was a noticeable difference in the overall experience of “Toy Story 3.” There were significant advances in the software available, the studios grew in size, and there was a huge influx of talented artists and practitioners working on the films. In producing “Toy Story 3,” the team at Pixar was able to build much more organic and flexible models and everything truly came together to tell such an emotional ending of a story through excellent, believable animation.

That brings us to “Toy Story 4,” the fourth and most technologically advanced film since the first animated classic in a series that started it all. It has been 9 years since “Toy Story 3” was released in theaters, and when comparing all films together side by side, it’s not hard to spot the differences. In “Toy Story 4,” the characters are richer and livelier, the movie is cinematic in a widescreen format, the sets are hyper-detailed, the toys have more varied textures, the shading lighting mimics illumination in real life. “Toy Story 4” is as realistic looking as an animated film can get.

The toys became richer and more detailed, and the worlds became more believable, but even seeing “Toy Story” and “Toy Story 4” side-by-side, you can tell that it’s still the same world and the same story we all know and love. “We want to stay visually consistent within the world. So within each movie, we’re consistent, but we’re doing our best to be consistent throughout the different movies. We want to bring richness and texture to it, but we still want to keep a level of stylization.” said Pauley. It’s true that “Toy Story 4” gives more of the illusion of real-life than the first film does. But it’s still the same world of beloved toy characters that so many of us can’t get enough of.

The advances in technology between “Toy Story” and “Toy Story 4” are best understood with a rain sequence. Pauley and Reeves discussed how John Lasseter wanted a rainstorm in “Toy Story” to set the mood, but Reeves had to tell Lasseter that they were unable to create a realistic rainstorm or have rain interacting with any of the characters. The “Toy Story” team had to work with the tools they had to tell the story, and they decided to use rain as an exterior backdrop and depict raindrops in the interior of Andy’s bedroom window. Even this rain scene in the first “Toy Story” took one person “maybe a month” to complete.

But in “Toy Story 4,” the team finally was able to successfully animate rain with much less limitations than they had over two decades prior. It took around 6 months and the largest portion of the effects budget to build the rain sequence in the beginning of “Toy Story 4,” but it was pivotal in order to set up the departure of Bo Peep and create such an emotional moment for the toys. “It was the money shot,” Reeves said.

A lot has changed for Pixar between “Toy Story” and “Toy Story 4,” but as fans, we’d agree that everything has changed for the better. We can’t wait to see the full-length “Toy Story 4” in person when it hits theaters on June 21, and even though the film’s elements and characters look significantly more lifelike than they did in “Toy Story,” we know we’ll fall in love with this movie just as much as we did 24 years ago.

Tickets for Toy Story 4 are available for pre-sale now. Want to learn more about Pixar and Toy Story 4?

Don’t miss our other articles from the same set of interviews and stay tuned to Inside the Magic as we share more insights from the creative team behind Toy Story 4 coming to theatres June 21.

Comments Off on Disney-Pixar history: How the first Pixar film “Toy Story” evolved to “Toy Story 4”