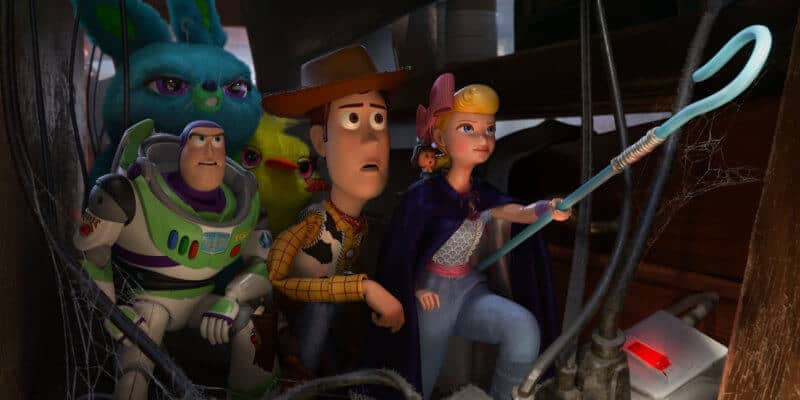 When long-time “Toy Story” fans first saw Bo Peep’s new look in advertisements for “Toy Story 4,” many were caught off guard. The character who was previously known as docile, sweet Bo Peep now sports a blue pantsuit and a cape instead of the pink polka-dot dress we were so used to seeing in the original “Toy Story” film. But it’s been 20 years since we’ve seen Bo Peep in theaters, and as time has passed her character has turned into a strong, independent woman and a fantastic role model for kids everywhere.

Inside the Magic recently had the opportunity to sit down with the creators of Bo Peep in the upcoming “Toy Story 4” film, which hits theaters June 21. During their presentation at Pixar Studios, the animators, artists, writers, and supervisors shared who Bo Peep has become in the two decades since we’ve seen her — and why Bo Peep is truly the hero of the fourth “Toy Story” film.

Who is Bo Peep?

“Right away from the start, Bo Peep was a central piece of the reason we made ‘Toy Story 4,'” said story supervisor Valerie LaPointe. “What we know of her character is she starts as a baby lamp, as a toy on an appliance. And in ‘Toy Story 4,’ we see her become a lost toy.” When LaPointe and the rest of Team Bo were deciding how to make Bo Peep a part of the “Toy Story 4” film, they compiled all of the clips from the first two “Toy Story” films to figure out what they had to work with for Bo Peep as a character. From the few scenes Bo Peep is featured in the first two “Toy Story” films, we can tell she is confident, a flirty counterpart to Woody and often his voice of reason to him. “She knows his true character better than any other toy,” LaPointe said.

But what was Bo Peep’s experience changing from the role as a toy on a childhood lamp to a lost toy? Team Bo had to figure out what could have happened to Bo Peep from the time she was given away after “Toy Story 2” up until when we see her again as a star in the fourth film in the series. And ultimately, after exploring all of the experiences and mentalities Bo Peep could have had about who she is, the creators decided that maybe she simply wants to be a toy, like Buzz, Woody, and the rest of the toys she spent so much time around before she was given away. “She doesn’t want to be on a lamp, she doesn’t want to embrace bring porcelain, she’s just a toy,” LaPointe said.

From what we can tell of Bo Peep in the “Toy Story 4” trailers and from Team Bo’s presentation on her character in the upcoming film, Bo Peep has become an integral, main character of this story. And as LaPointe shared in the presentation, Bo Peep is the driving force to the big change Woody goes through in “Toy Story 4”: becoming a lost toy.

How has she evolved?

At some point, Bo Peep decided that in order to get the most out of her life, she would take on the role of a lost toy, and this is how she shows Woody how adventurous and fun his life can be outside of a kid’s bedroom. In “Toy Story 4,” the writers have used this newfound positive attitude toward being a lost toy (which was, according to the previous films, the worst possible thing that could happen to a toy) to shift Woody’s perspective on what it means for a toy to be lost.

Bo Peep is just as much a part of “Toy Story 4” as Woody and Forky. And with Bo Peep being such a main character in this film, we can’t help but think of her as the strong-willed, independent female lead we’ve needed from the “Toy Story” series all this time. We’ve seen Jessie as a powerful female character in the “Toy Story” films before, but Bo Peep brings an extra element of sass, charisma, and independence that we haven’t yet seen from the series. Just because she’s porcelain doesn’t mean she’s not strong.

“She’s a character who decided she didn’t want to just sit on a shelf and wait for life to happen,” said story artist Carrie Hobson. “She had to learn how to adapt. She takes chances and it somewhat unpredictable.” Hobson explains that unlike other toys, Bo Peep doesn’t play by the rules and can break her default toy mode, meaning when she becomes a toy for a kid, she can choose what pose she locks into, giving her the ability to choose what type of toy she will be, from a doll to an action hero.

Even though it’s been 20 years since we’ve seen Bo Peep on the big screen, her character in “Toy Story 4” shows us that she truly is the hero we’ve needed all along. She is just as feminine and kind as she was in the first film, but she can be as powerful, resourceful, witty, and tough as she needs to be. And for that reason, we couldn’t be more excited to see her hit the big screen this summer.

Look out, Woody and Buzz. There’s a new hero in town!