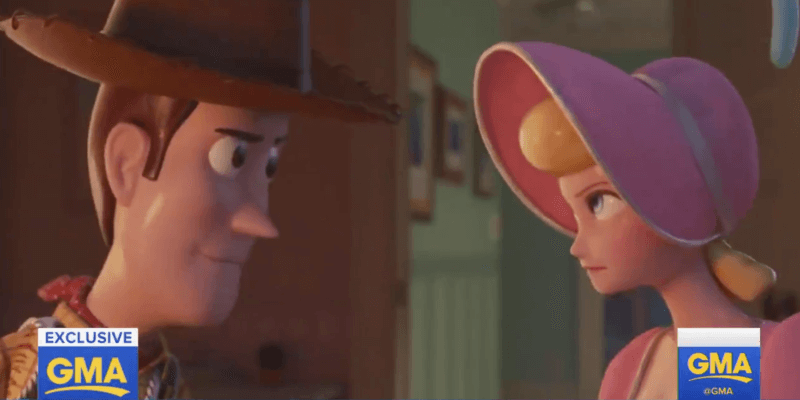 The release of “Toy Story 4” is getting closer, and as this highly anticipated animated film moves toward the big screen, Disney/Pixar has given us even more to lose our marbles for! Today, Good Morning America showed an exclusive new clip from the film, giving us a first look at Bo Peep in action with the rest of the gang, and a look at her past relationship with Woody.

In the never-before-seen clip from the film, which is a flashback from before Bo Peep gets her new look and when the toys still live with Andy, we see Bo Peep rising into action to help the gang recover one of their own. The wireless remote control car R.C. gets caught in a heavy flow of rainwater rushing through a gulley in their neighborhood street, and Peep immediately takes control of the situation with the help of her sheep Billy, Goat, and Gruff.

We're giving you an EXCLUSIVE look at the newest @toystory movie! So excited to go to infinity and beyond! #ToyStory4 pic.twitter.com/lA2GEgc21y

“Operation Pull Toy” becomes the toys’ plan of action to save R.C., and Slinky Dog and the Barbies are called into play before the scene ends.

During the new action-packed scene, you can’t help but feel a hidden spark in the relationship between Woody and Bo Peep, who at times not only speak in unison but make quick references to their past. From only this quick encounter, it’s easy to see that these two have a history. Granted, this scene takes place in the past, but it definitely shows that these two had some sort of connection. We’ll have to wait till the film premieres to see just how deep the past of these two toys really goes.

Only a few weeks ago did we learn Bo Peep would be joining the cast in the new film, and in addition, we saw the news that Keanu Reeves would be joining the voice cast. In a report by Observer, it was revealed that Reeves’ character, Duke Kaboom, “hails from a place where discontinued toys are sent.” Reportedly, this character is said to help the famous porcelain shepherdess Bo Peep in the new film when her sheep are taken away from her.

What are your thoughts of Woody and Bo Peep’s past relationship? Let us know in the comments below!

Comments Off on New “Toy Story 4” clip shows Bo Peep and Woody back in action, showing off their chemistry