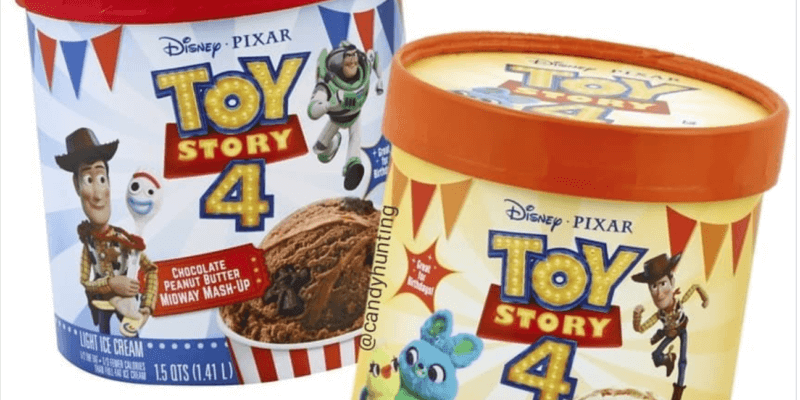 As the release date for “Toy Story 4” gets closer, we’re seeing the coming of what will probably be one of Edy’s Ice Cream’s most popular flavors of all time, as the company has created two new varieties themed after the highly anticipated film.

The “Toy Story” films have always been a sweet memory for kids who’ve grown up over the past two decades, as they’ve offered viewers the chance to see a heroic and heartwarming story of a group of toys coming together time and time again to fight against all odds. And what better way to celebrate these memories than with two new ice cream flavors!

According to Bustle, the new flavors first appeared by way of Instagram user @candyhunting, a popular food Instagrammer who shared the images of Edy’s new flavors on Feb. 13.

The first flavor, Cinnamon Churro Carnival Combo, which seems to be themed after what is believed to be a major location in the new film, comes in a yellow container with Woody and his new pals Ducky and Bunny.

The second flavor, Chocolate Peanut Butter Midway Mash-up, similarly themed after the carnival-style games to possibly be featured in the new film, comes in a blue container and features a blue background with Woody, Buzz Lightyear and their new pal Forky. A special element to point out in this new flavor is, if you look closely, you’ll see little chocolate pieces shaped like Buzz himself.

Bustle reports that confirmation of the existence of these new ice cream flavors comes from Instacart, a same-day grocery delivery service, which now features both of the new flavors by Edy’s. The flavors are not yet listed on Edy’s official website.

According to Bustle, the flavors might not be getting a wide release for quite a while as they pointed to the fact that the film isn’t debuting in theaters until mid-June, meaning the flavors might be more of “summer ice cream situation.”

What are your thoughts on these new flavors of ice cream? Let us know in the comments below!