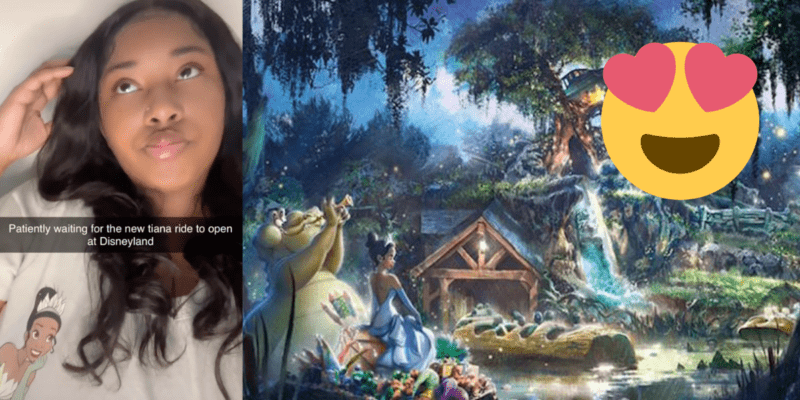 On July 1, Disney finally gave a name to the previously-announced Princess and the Frog (2009) retheme of Splash Mountain at Disneyland Park and Magic Kingdom.

At the ESSENCE of Culture Festival in New Orleans, Disney Park Imagineers gathered to announce that the attraction will be called Tiana’s Bayou Adventure and open in late 2024.

Despite a popular petition to #SaveSplashMountain, the Disney Parks ride inspired by the controversial and widely-banned Song of the South (1946) will close sometime in the next two years. Walt Disney World and Disneyland haven’t yet confirmed a closing date for Splash Mountain.

Though some Splash Mountain fans are heartbroken, many Princess and the Frog fans look forward to the retheme. One of those fans is @nolagirl504_ on TikTok, who shared a video captioned:

“Patiently waiting for the new Tiana ride to open at Disneyland.”

In the video, the Disneyland fan wears a Princess Tiana tee shirt and listens to a song from the 2009 Walt Disney Animation Studios film.

Ahead of the retheme, Splash Mountain in Magic Kingdom’s Frontierland has been experiencing major technical issues. Three logs have sunk with Guests onboard. Additionally, many beloved animatronics and water effects are broken despite recent refurbishment.

After 2024, the only remaining Splash Mountain will be in Critter Country at Tokyo Disneyland, which opened on October 1, 1992 – just one day before Walt Disney World Resort’s iteration of the ride.

Are you looking forward to Splash Mountain reopening as Tiana’s Bayou Adventure at Disneyland Resort and Walt Disney World Resort in 2024?