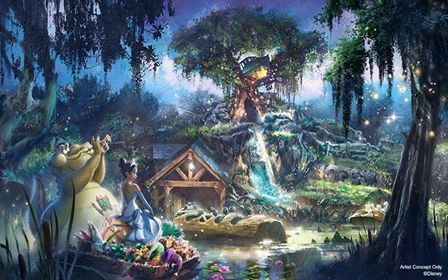 Splash Mountain will soon be a distant memory at Walt Disney World Resort and Disneyland Resort.

For more than two years now, Disney has said that a retheme would be coming to Splash Mountain at Walt Disney World Resort and Disneyland Resort in the form of Princess Tiana and her movie Princess and the Frog (2009).

Anika Noni Rose, who voices Princess Tiana, recently revealed earlier this month that the Princess and the Frog attraction would open in 2024, but Disney would not confirm those comments.

Disney promised to give new details at the Essence Festival of Culture in New Orleans this weekend and they did just that.

Disney announced today that the name of the attraction would be “Tiana’s Bayou Adventure” and that the ride is set to open at both Magic Kingdom in Disney World and Disneyland Park in 2024.

A closing date at either Disney Park has not been confirmed for Splash Mountain at this time.

Disney previously shared these details about the reimagining:

What do you think of the changes coming to Splash Mountain? Let us know in the comments!