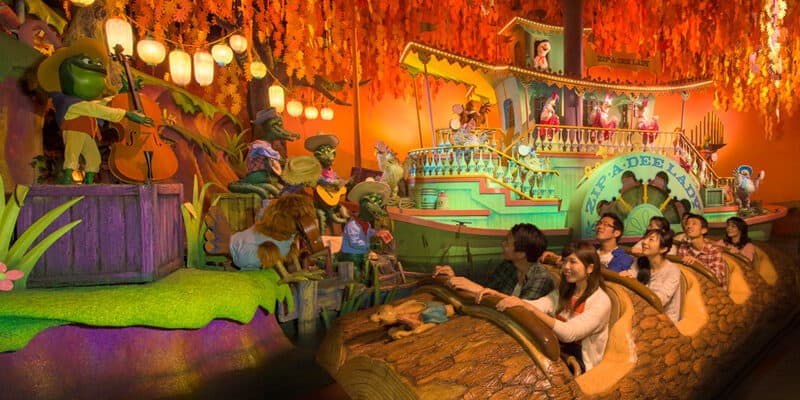 More changes have descended on Disney Parks, as another Resort slowly begins to remove Splash Mountain references from its premises.

In recent years, the Splash Mountain branding has become increasingly incongruous with Disney Parks worldwide. Stemming from the historically controversial, and much-discussed, live-action meets animation Disney adaptation of the Uncle Remus stories, Song of the South (1946), the characters of Br’er Rabbit, Br’er Brear, and Br’er Fox were installed into the Disney theme park portfolio back in 1989.

The Splash Mountain ride spans three continents with the water ride appearing at Walt Disney World Resort’s Magic Kingdom Park, Disneyland Resort’s Disneyland Park, and Tokyo Disney Resort’s Tokyo Disneyland. It is a fan favorite of many Guests and its recent upheaval in the United States Parks has been the cause of much contention.

By 2024, the characters inspired by the Song of the South‘s animated sequences will no more be part of the Disney attraction catalog. Instead, at least domestically, Splash Mountain will be rethemed to Tiana’s Bayou Adventure — an attraction based on The Walt Disney Company’s 2009 animated movie, The Princess and the Frog. Princess Tiana voice actress, Anika Noni Rose accidentally spilled debut details, and not long later, at the ESSENCE Festival, Disney confirmed the New Orleans-themed attraction will be looking to open in 2024.

However, while the domestic Parks look to eradicate any remnants of Song of the South, and Splash Mountain from their locations, no word yet has come from Tokyo Disney Resort. This is likely due to the Resort, which is found in Urayasu, Chiba, Japan, and consists of Tokyo Disneyland, Tokyo DisneySea, and the Ikspiari retail area, being wholly owned and operated by The Oriental Land Company — the only Disney Park worldwide not run in any way by The Walt Disney Company’s Parks division.

And yet, while there has been no official update on the Japanese Resort’s own Splash Mountain attraction, the Resort is seemingly curating what content Guests can hear while visiting the Parks.

Twitter user @P29294180 shared a clip confirming that the Song of the South tune had been removed from the music loop at the Resort Gateway Station. The (translated) tweet reads:

From the BGM setlist of Resort Gateway Station,

The removal of the Academy Award-winning “Zip-a-Dee-Doo-Dah” from this music loop could be the precursor for more changes coming to this Resort, and the final Splash Mountain location worldwide.

It is not known just how much of a different attraction Tiana’s Bayou Adventure will be or exactly when the refurbishment will commence. Regardless of its content, for diehard Splash Mountain Disney fans, the Disney experience will completely change in two years’ time.

Do you think this music removal is a sign of a Splash Mountain retheme at Tokyo Disney Resort? Let us know in the comments down below!