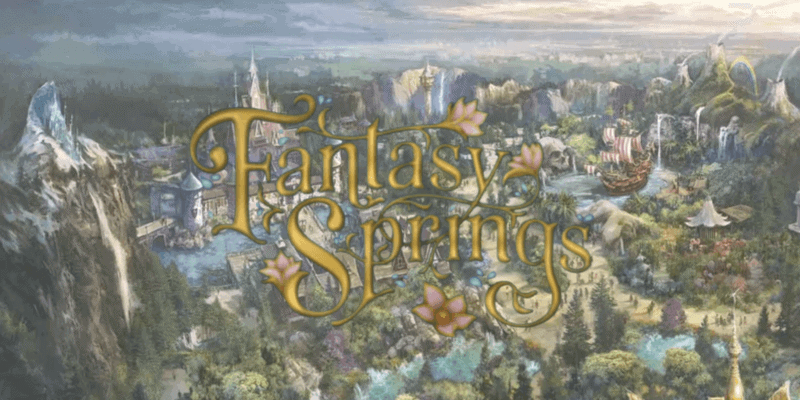 In celebration of Tokyo Disney Resort which opened on April 15, 1983, a new video featuring the upcoming Fantasy Springs area has been released!

The video features amazing 3D looks at Frozen‘s Arendelle, Rapunzel’s tower from Tangled, and Peter Pan’s Neverland — all of these areas are set to be part of the incredible Fantasy Springs expansion.

Tokyo DisneySea has offered some behind-the-scenes looks of full 3D models that represent what Guests will see when Fantasy Springs is completed.

Disney’s animated feature, Frozen, will come to life in an area designed to look just like Anna and Elsa’s Arendelle. This will be similar to the Frozen expansion that is currently underway at Disneyland Paris.

In an official Tokyo Disney Resort video, viewers can see Arendelle’s castle in front of Elsa’s ice fortress. Guests will travel across the bridge to take a closer glimpse at the castle and feel as if they are one of Arendelle’s residents.

At Last I See the Light

Fantasy Springs will also include an ode to Disney fan-favorite, Tangled. Many Tangled fans will rejoice in visiting a new land that features Rapunzel’s tower adjacent to a gorgeous waterfall. If you look closely, you’ll notice Guests on the new Tangled attraction that the Disney Fandom Wiki describes as:

Guests will board gondolas for a romantic boat tour of Rapunzel’s “best day ever” as Rapunzel journeys with Flynn Rider to the lantern festival. Countless flickering lanterns illuminate the attraction’s climactic scene while Rapunzel and Flynn sing the iconic song “I See the Light”, leading to an unforgettable finale.

The final area in the Fantasy Springs expansion will be Peter Pan‘s Neverland. This will include Captain Hook’s ship and Skull Rock, among other locations.

Furthermore, these videos show that Fantasy Springs will include buildings that may become dining options and shopping experiences.

Also, at the beginning of the video, there appears to be a stone structure with cascading fountains and a carving that resembles Cinderella. Could this be the entrance to Fantasy Springs? While nothing has been confirmed, it would be a gorgeous entry!

Tokyo DisneySea’s Fantasy Springs is set to debut in 2023.. These 3D models will get any Disney fan excited and we are looking forward to many more announcements regarding of this gorgeous new DisneySea area! As a reminder, check Tokyo Disney Resort’s official website for more information!

Are you planning to visit Tokyo Disneyland and Tokyo DisneySea in 2023? Let us know in the comments below!

Do you need some help planning your next Tokyo Disney vacation! Our friends at Academy Travel can show you how to have the best international Disney trip!