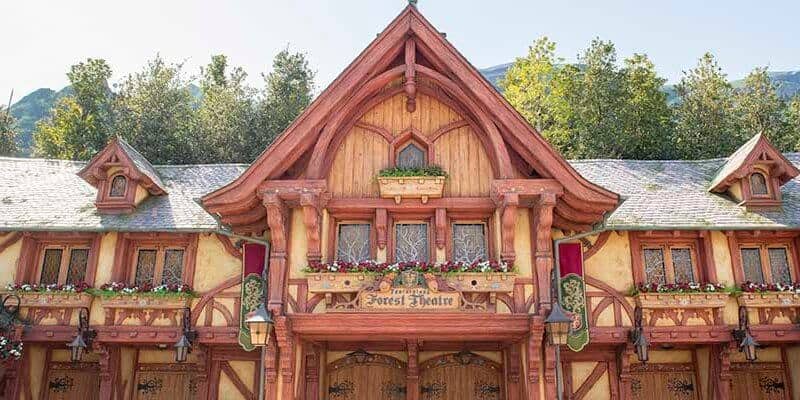 Last year, Walt Disney World’s entertainment team was hit hard due to the layoffs of thousands of Cast Members who worked in shows such as Beauty and the Beast — Live on Stage at Disney’s Hollywood Studios and The Festival of The Lion King show at Disney’s Animal Kingdom.

Walt Disney World wasn’t the only Disney Park to put a pause on live entertainment due to the ongoing pandemic. In fact, many Disney Parks shows were temporarily unavailable around the world and it may have felt as though a bit of Disney Magic was taken away.

A New Show Will Debut In Tokyo Disneyland

Well, there is some good news for live entertainment as Tokyo Disneyland announced it will feature a new show called Mickey’s Magical Music World presented by Fantasyland Forest! In fact, it is debuting April 1, 2021.

This new stage show will feature 25 minutes of music and dance with some of your favorite Disney friends in what looks like an Enchanted Forest theater.

In this video featured by DLP Report on Twitter, Disney Imagineer Jim Clark shares a bit of the backstory and some designs and inspirations inside the new “Fantasy Land Forest Theater” at Tokyo Disneyland. Clark said:

“The idea is that a group of theater artists, went out in to the woods, and they constructed this entire theater out of the natural materials that they found in the forest. One of the fun things about the forest theater is, you might find some more obcsure Disney charaters hidden in the banners and the tapstries and the murals in the walls which we think is a lot of fun.”

Scheduled times for the upcoming show Mickeys Magical Music World are posted for the month of April at five separate time slots. If you are planning to watch the show, there is something you should know ahead of time — Guests must plan and choose beforehand which show they would like to see, something Tokyo Disney calls a “lottery.”

Performance times subject to change without prior notice. You can check out the schedule here.

Also, the park asks Guests to check their smartphones and devices if they want to reserve a spot inside “The Fantasyland Forest Theatre”. The Tokyo Disneyland website states:

This entertainment program requires an Entry Request completed on the Tokyo Disney Resort App while inside the Park.

You will be able to enter the venue if you have been assigned a time slot through the Entry Request. Reserved seats only to view the performance.

If you do not have a smartphone, please contact a Cast Member at the venue.

For Guests safety and enjoyment, they will be escorted to the theater by seating area. Respectively, the theater asks that during the performance Guests should remove large hats or headwear, and children should not be lifted to view the performance.

What Does This Mean For The Future of U.S. Parks?

Disney World announced in January 2021 that the beloved and popular show — The Festival of The Lion King — at Disney’s Animal Kingdom would return in the summer! But with Tokyo Disney bringing live entertainment to the parks, could we see more shows return to Walt Disney World or Disneyland when they reopen next month?

Well, Disney World and Disneyland could implement some of the safety protocols that Tokyo Disney has put into place for live entertainment, including fewer Guests inside shows venues as well as social distancing markers throughout the theaters.

Disney CEO Bob Chapek was recently asked if he had an update on the entertainment offerings at Walt Disney World earlier in the year and explained:

“You know one of the drawbacks of obviously of the pandemic in terms of our limited reopening is that the number of actual shows that we can have are greatly diminished because of social distancing, and we’re still trying to figure out exactly as we scale back up our operations at our park our entertainment how those will look going forward in the future because right now we’re obviously trying to limit contact with Guests and with each other, but we’re working on it, we’re trying to figure that out.”

We can only hope that taking ideas from other Disney Parks, such as Tokyo Disneyland, can indeed return some of our favorite shows and spectacles and that the future of Disney entertainment in the parks can flourish once again.

What are your favorite Disney Parks shows? Which do you want to see return to Disney World or Disneyland? Let us know in the comments below.

Planning a Tokyo Disneyland Trip soon? We can help, click on the link for more information!