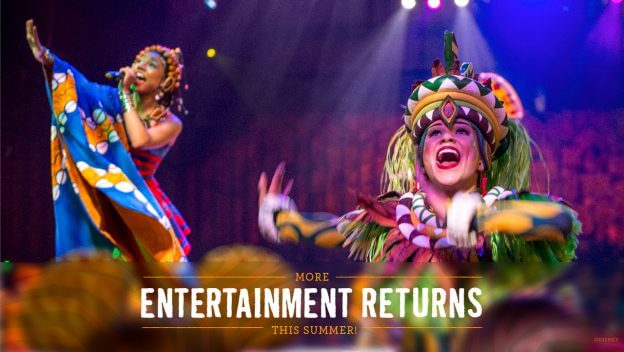 The Festival of the Lion King will be making a triumphant return to Disney’s Animal Kingdom at Disney World this year! We are so happy to share this announcement with you as Disney has stated that this will be the start of more entertainment offerings returning to Walt Disney World Resort in Orlando, Florida.

As you may recall, Disney has lost so many amazing entertainers and shows over the course of 2020. The company laid off thousands of performers and several live entertainment shows had to be cut for some time. Now, The Festival of the Lion King is coming back. This is a great start to the return of some of our favorite shows and performers at Walt Disney World!

Disney has just announced on the Disney Parks Blog that beloved show Festival of the Lion King will be RETURNING to Disney’s Animal Kingdom this summer. Here are the official details:

We are thrilled to be starting the process of bringing back to work more singers, dancers, technicians and other cast members, from one of the most popular shows at Walt Disney World Resort. Expected this summer, the Harambe Theatre at Disney’s Animal Kingdom Theme Park will host that fan-favorite troupe of musical storytellers, along with Simba and his friends, in a celebration of the incomparable “Festival of the Lion King.”

When it returns, “Festival of the Lion King” will be presented in a modified format to be mindful of the current environment. There will be adjustments to the show on stage and backstage, including updates to choreography to allow for appropriate physical distancing. We’ll also adjust how the audience is seated, in line with other theater-based experiences at Walt Disney World Resort.

The show is going to be modified, and we are certain that health and safety will be of the utmost concern. Still, we are glad to get some version of the show back in any capacity!

Previously, Disney had confirmed that they planned to bring more and more entertainment offerings back to Disney World after the cutbacks from 2020. We did not expect this to happen so soon, so this is a wonderful surprise!

Disney describes The Festival of the Lion King as:

As the lights dim, hear the sounds of the African savanna. A kinetic kaleidoscope of color floods the stage as colossal puppets, extravagantly costumed dancers, a daring fire dancer and incredible stilt walkers dazzle the senses.

Are you excited to see the return of The Festival of the Lion King? Let us know in the comments!

We can help you book the perfect Walt Disney World vacation — click here for more details!