Festival of The Lion King Returns to WDW - Which Shows Will Be Next? - Inside the Magic 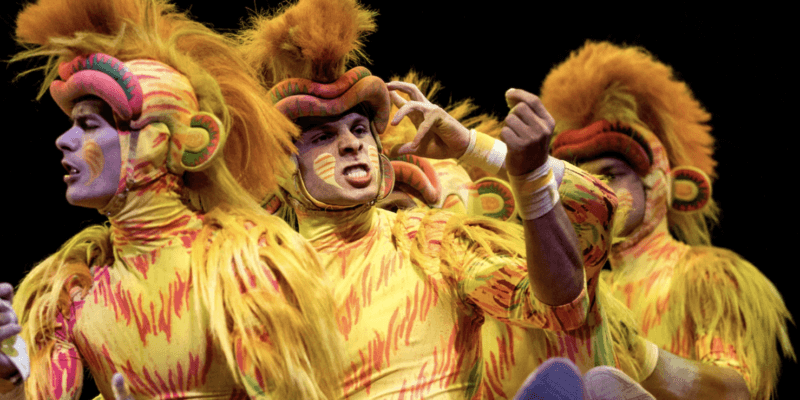 Yesterday, Disney World made an exciting announcement regarding one popular show at Disney’s Animal Kingdom — Festival of The Lion King.

Returning this summer, this fan-favorite show is making a comeback (with modifications to keep both Cast Members and Guests safe during this time), which also allows certain performers and crew members to get back to work!

In case you missed it, the Walt Disney Company had to make the difficult decision to lay off tens of thousands of Cast Members across Disney Parks and Resorts in the U.S., including employees of both Disneyland in Anaheim, California, and Walt Disney World in Central Florida (Orlando). These layoffs also included a majority of the entertainment cast at the theme parks.

Not long after the entertainment layoff notices went out in October, Disney released a statement saying that they will, in fact, bring back entertainment when the time is right. Additionally, in yesterday’s statement regarding the return of Festival of The Lion King, Disney shared the following:

We are thrilled to be starting the process of bringing back to work more singers, dancers, technicians and other cast members, from one of the most popular shows at Walt Disney World Resort.

This statement clearly shows that Disney is anticipating bringing back even more entertainment shows as well as other Cast Members in the future — but which shows could be next?

Note that Disney has not specifically announced which shows are returning in addition to The Festival of The Lion King and this is our own speculation.

Beauty and the Beast Live on Stage

However, due to the global pandemic, and the ongoing battle between the Actors’ Equity Union and Disney, the show was put on hold for a short period of time back in August (with a temporary Disney Society Orchestra show) before Disney made the announcement that the company would be laying off the Beauty and the Beast Live on Stage cast in October.

Festival of The Lion King performers, who were also laid off back in October, are part of the same Equity Union as Beauty and the Beast Live on Stage, so we could possibly see this Disney’s Hollywood Studios show return next.

Back in September, there was some talk that Disney was preparing to remove the Voyage of The Little Mermaid attraction at Disney’s Hollywood Studios completely due to a missing poster. However, Disney did confirm that this was not the case and the show isn’t going anywhere — it just hasn’t been operating due to the current pandemic.

In case you haven’t experienced this attraction, Disney World describes Voyage of The Little Mermaid as:

Once again, this show includes performers from the same Equity Union, so we could possibly see this show return considering we know Disney made it clear, this show isn’t going anywhere anytime soon.

Located in Disney’s Animal Kingdom, not far from Festival of The Lion King, is another fan-favorite show — Finding Nemo The Musical. This indoor show is performed in a theater environment similar to the For the First Time in Forever: A Frozen Sing-Along Celebration show at Disney’s Hollywood Studios, which Disney World brought back last fall.

If you haven’t yet had the chance to experience Finding Nemo The Musical, the official Disney World description reads:

Take your fins and family and dive right into this “big blue world!”

If Disney wanted to bring back Finding Nemo The Musical, which has performers from the Actor’s Equity Association, it could be in a similar way they are doing it for both Festival of The Lion King and what they did for For the First Time in Forever: A Frozen Sing-Along Celebration.

Over at Magic Kingdom, located in Tomorrowland, is the popular show called Monsters, Inc. Laugh Floor, which brings Guests into a comedy show starring Mike Wazowski, Roz, and other famous monsters from the Disney Pixar film, Monsters, Inc. Disney World describes this attraction as:

The performers who were part of Monsters, Inc. Laugh Floor are also associated with the same Actor’s Equity Union. Once again, this stage show is set up similar to For the First Time in Forever: A Frozen Sing-Along Celebration and The Enchanted Tiki Room — both of which implemented socially distanced seating in order to comply with the CDC guidelines, keeping both Cast Members and Guests safe.

They would, however, have to make other modifications to how the Guests interact as a Cast Member used to walk around with a microphone so that the performers could hear what the Guests were saying. This, of course, is not pandemic friendly so Disney would need to figure out another way to make this work if they plan to bring back this show during the current pandemic.

The good news about Indiana Jones Epic Stunt Spectacular is that this theater is outdoors and very spacious, making social distancing much easier to implement.

However, the only downside here is that for one section of the show, performers would select random Guests from the audience to participate in one of the scenes. Due to the pandemic, this most likely won’t be able to happen; however, that doesn’t mean Disney can’t bring this show back and just make modifications to it, just as they have done with the other Disney World shows.

Located in EPCOT, this interactive show is another fan-favorite that has not been operating due to the pandemic. The official description reads:

Much like the performers who were part of the shows we have listed above, the cast of Turtle Talk With Crush, also part of the same Equity Union, was let go last year. This show could make a comeback to the theme park in the near future, but once again, Disney would have to implement social distancing measures and make other modifications to how the Guests interact.

This one may be a bit harder to bring back with safety protocols in place; however, as we have seen demonstrated at Shanghai Disneyland, Disney World could put markers on the ground to implement social distancing. Not only could the theme park use these markers for Mickey’s Royal Friendship Faire, but if they wanted to start bringing back nighttime spectaculars, such as Happily Ever After, then they could utilize these social distancing markers for both entertainment offerings.

The performers in Mickey’s Royal Friendship Faire are also part of the same Equity Union as the other shows we have listed above.

Disney World Shows and Performers That May Not Return Right Away

Some of the performers that we don’t expect to return soon include those that cannot operate in a pandemic-friendly environment and could potentially cause people to gather, including the Citizens of Hollywood, the Citizens of Main Street, the Green Army Drum Corps, and Move It, Shake It, MousekeDance It Street Party (simply due to the fact that Disney already has new cavalcades in place for the time being).

So what do you think? Which shows will be next to return? Let us know your guesses in the comments below.