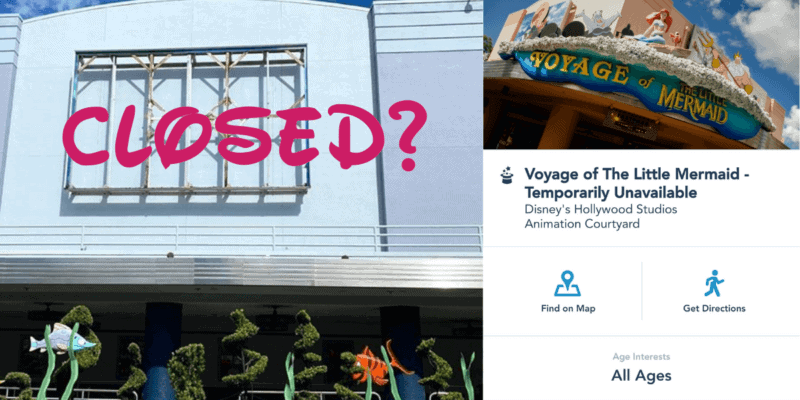 Photos of signage being removed around the Voyage of The Little Mermaid stage show at Disney’s Hollywood Studios point to a popular rumor that the show will not be returning.

Photos posted by @disneynews55 on Instagram show the large poster on the side of Voyage of The Little Mermaid show building has been removed.

Oh no!! This may be a sign of bad news the #voyageofthelittlemermaid billboard has been taken down at Disney’s #hollywoodstudios park ? hopefully it’s not taken out permanently

Here is a before photo from @dailydisney_post on Instagram, showing the poster and its beautiful artwork for the stage show. (You can see it on the left hand side of the image).

You can see the caption of the photo says,

“The Voyage of the Little Mermaid is reportedly closed for good”

This rumor has been alive for while inside the Disney fan community as the stage show has seen little updates during its run. The rumor is picking up speed again however as Disney and the Actors’ Equity Union have struggled to see eye to eye on how to proceed safely with bringing the actors back to work at the theme parks. The removal of signage for Voyage of The Little Mermaid does little to reassure fans of the show’s footing.

Currently, on the My Disney Experience app, the stage show is listed as “Temporarily Unavailable”

Related: ‘Beauty and the Beast’ Show Replaced at Hollywood Studios

Add the removal of the sign, the back and forth discussion with Disney and Actors’ Equity Union, and the replacement of the popular ‘Beauty and the Beast’ stage show, and things seem very uncertain for stage shows at Disney’s Hollywood Studios in the future.

As we here at Inside the Magic are fond of the stage shows we do hope to see them return in the future, however, we do understand that the constant nature of the Disney parks is changing. We will continue to monitor this story closely and keep you updated with more information as it comes! Stay tuned!

Do you think the Voyage of The Little Mermaid stage show will be closing permanently? Let us know in the comments!

Book a trip to Disney World with the help of our travel experts to experience everything new at Disney’s Hollywood Studios!