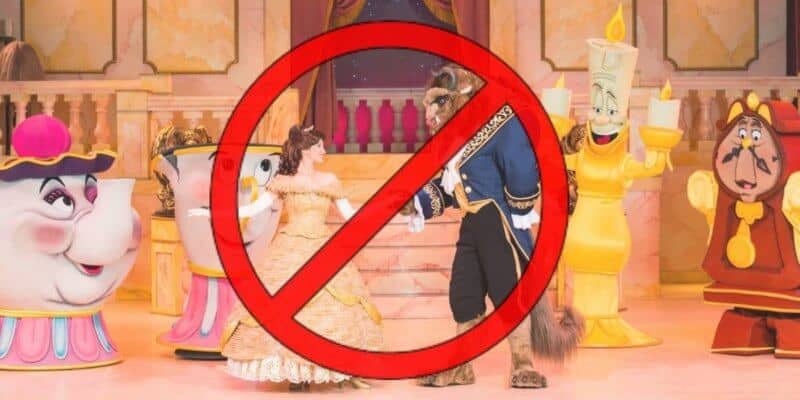 However, due to the global pandemic, and the ongoing battle with the Actors’ Equity Union and Disney, the show has been placed on hold.

Now, it looks as though Disney is replacing the fan favorite show with a new Disney Society Orchestra show, despite Disney’s ongoing dispute with the Actor’s Equity Union. It looks as though the new show does not feature performers represented by the Actors’ Equity Association.

According to Instagram user @parkhoppergal, a temporary show titled The Disney Society Orchestra is replacing Beauty and the Beast Live on Stage inside the Theatre of the Stars in Disney’s Hollywood Studios. The show includes a band who plays iconic Disney songs from The Little Mermaid, The Muppets, Monsters, Inc., and more. She captioned the post with:

LOVE the new temporary show in the Theatre of the Stars from the Disney Society Orchestra!! Live music is one of my favorite things and they did not disappoint – Cantina Band, The Muppets, Monsters Inc, The Little Mermaid, and of course our favorite bookworm princess! I’d LOVVVVVE to see Disney keep some form of this moving forward. Great way to beat the heat, catch a glimpse of our characters and hear some of the most talented musicians in the land

LOVE the new temporary show in the Theatre of the Stars from the Disney Society Orchestra!! Live music is one of my favorite things and they did not disappoint – Cantina Band, The Muppets, Monsters Inc, The Little Mermaid, and of course our favorite bookworm princess! I’d LOVVVVVE to see Disney keep some form of this moving forward. Great way to beat the heat, catch a glimpse of our characters and hear some of the most talented musicians in the land ✨?✨ #disneysocietyorchestra #hs #wdw #disneyparks #parkhoppergal

In the Instagram post above, you can see that some of the characters from the original Beauty and the Beast Live on Stage show still make appearances. Belle, Beast, Lumiere, Cogsworth and others came out on stage during the performance as they remained social distanced and followed safety protocols!

According to Orlando Sentinel, “In the new nearly 20-minute show, a six-piece combo plays familiar Disney tunes such as ‘Under the Sea’ and ‘You’ve Got a Friend in Me’, along with songs from other Disney franchises such as the ‘Cantina Song’ from ‘Star Wars’ and ‘The Muppet Show’ theme.”

“For the grand finale, a medley from ‘Beauty and the Beast,’ performers dressed as the movie’s Mrs. Potts, Lumiere, Cogsworth and Chip appear onstage, moving in a choreographed routine, before being joined by Belle and the Beast — who wave to the audience, but remain silent. Those characters usually appear in the ‘Beauty and the Beast’ stage show,” Orlando Sentinel also reports.

It wasn’t long ago that Inside the Magic reported the Actors’ Equity Association speaking out and asking Walt Disney World in Florida to follow along with Disneyland’s decision in postponing the reopening date. Following the significant spike in the ongoing pandemic, they felt this was the safest thing to do.

We also recently reported that some Walt Disney World performers have begun fighting against the Actors’ Equity Association for the right to return to work, despite the union’s ongoing protest. In fact, some stage shows have not resumed due to this dispute. Some of these shows include Finding Nemo – The Musical, Beauty and the Beast-Live on Stage, and Festival of the Lion King.

The dispute continued as the Actors’ Equity Association recently took the protest a step further, releasing a new video calling Walt Disney World out. The new video, which was posted to Facebook, closely resembles the “Welcome Home” video Disney World recently released as they were eager to welcome guests back to the theme parks. The Actors’ Equity Union’s version of the video starts off with the original video and background music as suddenly a case count appears as cast members say “Welcome Home” in the background.

Orlando Sentinel recently reported that some Local Equity members have been eager to return saying “they trust Disney’s precautions” while others don’t want to go back as they feel unsafe. “The grievance is still being negotiated; if an agreement can’t be reached, an arbitrator will be called in.”

Other shows that use these Equity actors, dancers and performers include Voyage of the Little Mermaid, Indiana Jones Epic Stunt Spectacular and Finding Nemo — The Musical, which all remain closed at this time.

Are you excited or upset to see Beauty and the Beast Live on Stage temporarily replaced with The Disney Society Orchestra? Let us know in the comments below.