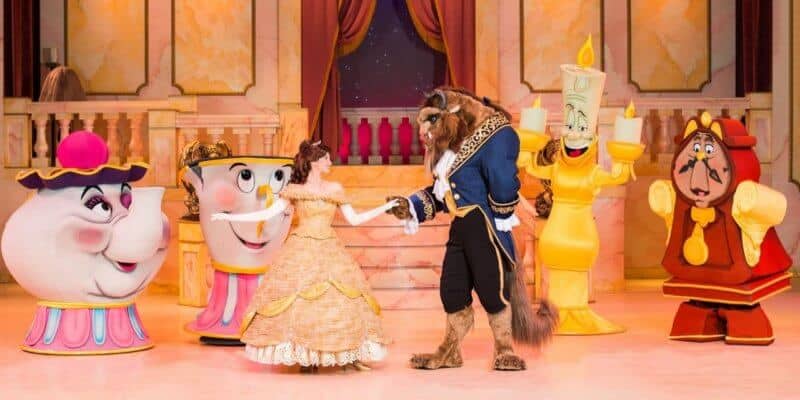 News is rolling in that among Walt Disney World’s latest cuts, is the cast of Beauty & The Beast – Live on Stage from Disney Hollywood Studios.

Twitter is busy with stories being shared, thoughts being sent, and the mourning of the great loss of not only the Beast cast, but also the Cast Members involved in the Monsters, Inc. Laugh Floor, the entire cast of the Citizens of Hollywood, Hoop Dee Doo Musical Revue and the casts of both Finding Nemo the Musical and Festival of the Lion King.

Note that at this time, Disney has not shared any new operational updates pertaining to the BATB stage show.

Cast of Beauty and the Beast: Live on Stage Laid Off

A very personal story was shared by Twitter user @Daniel_Shelnutt about his brother-in-law, who had been cast as Gaston for the live entertainment in the Sunset Boulevard Amphitheatre at Disney’s Hollywood Studios. Daniel’s tweet regarding Beauty and the Beast: Live on Stage reads,

“Unfortunately, my BiL, one of the Gastons in the Beauty and the Beast show, was one of the cast members let go today. As a reminder, executives’ salaries were restored to their full amount in August. I don’t blame them, though; families DO come to WDW to see the VP of Marketing”

More twitter stories are being shared, like this summary from @themeplhorizons about what they are trying to digest on Twitter tonight. So many reports are coming in about live entertainment all over Walt Disney World Resort.

Based on everything I’ve read about cast member layoffs on DisTwitter tonight, this is what we have lost:

The shock, surprise, and sorrow that we all share watching this great loss unfold are a bit raw. Twitter user @TheRonenverse shouts into the internet void what many are thinking… while @iwilliam_23 agrees to hearing, reading, and sharing the stories of the Cast Members we all hold dear.

HOOP DE DOO REVUE AND BEAUTY AND THE BEAST LIVE ON STAGE TOO? OH MY GOD IT’S EVERYTHING. https://t.co/W1ycRt4Nnr

While we knew layoffs were coming inside the Walt Disney Company, watching these live entertainment professionals who have been Cast Members for so long, losing their jobs in front of our eyes is heartbreaking for so many of us. We’re hopeful that one day, the Disney Parks will again be able to stand on their feet and rehire all our beloved entertainers.

Leave us a comment about your memories watching Beauty and the Beast: Live on Stage. We’re so fond of this show.

Comments Off on ‘Beauty and the Beast’ Live Cast Laid Off