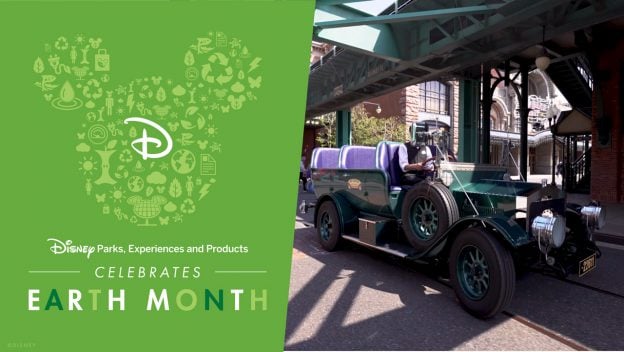 Walt Disney once said, “It’s fun to do the impossible”. His legacy lives on as Disney Imagineers bring future-forward ideas to life in Disney Parks around the world. During Earth Month, Disney has taken fans on a virtual tour of Tokyo DisneySea, showing viewers one attraction that not only looks fun, but keeps Mother Nature in mind!

Together, we would like to introduce the environmental initiatives at Tokyo Disney Resort. We are in American Waterfront at Tokyo DisneySea surrounded by New York City at the turn of the century. An attraction that takes you on a tour of the city aboard a classic car is very popular. All seven vehicles in the fleet are powered by electricity.

In addition to helping reduce greenhouse gas emissions, these vehicles provide a better experience, by not emitting gas fumes close to Guests. Electric cars are meant to be very quiet, but since these cars are supposed to be from the turn of the century, long before electricity was widely used, the engine noise was deliberately added.

Other green initiatives at Tokyo DisneySea include regulating the temperature of the air conditioning thoughout the year to adjust power consumption to the least possible amount, solar panels backstage, and LED lights throughout the entire Park. For example, the exterior lighting outside Mount Prometheus and various shopping areas are completely LED.

Reducing greenhouse gas emissions is just one of the ways Disney is helping the world we all live in, not only during Earth Month, but all year long. This will benefit generations of Disney Parks fans to come.

Disney is also working hard to reduce waste by introducing a line of reusable utensils Guests can purchase at select Disney Parks locations.

You can check out Disney Parks Blog for more information on Earth Month and be sure to watch the video below:

What are your thoughts on Disney’s work to keep the environment safe? Let us know in the comments below.

Do you need advice on planning your next Disney vacation? We know someone who can help, check out Academy Travel for more information!

Comments Off on Green Initiatives Propel Disney Parks Into the Future