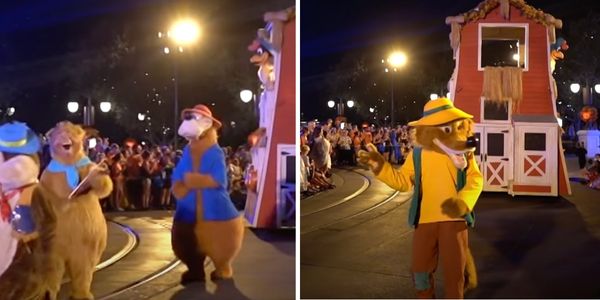 We are so excited to see Mickey’s Not-So-Scary Halloween Party finally return to the Walt Disney World Resort.

Last year, Disney World was unable to host Mickey’s Not-So-Scary Halloween Party due to the ongoing pandemic. To replace the fan-favorite party, Walt Disney World Resort brought Guests a brand-new Disney After Hours event at Magic Kingdom called Disney After Hours BOO BASH. While fun, these were no comparison to the legendary Haloween party that thousands of Guests had come to love and thankfully, as of Friday, the party is in full swing.

However, there are some key differences in this year’s party. In this most recent version of Mickey’s Boo To You Halloween Parade, a few iconic characters were missing from the star-studded lineup, with both Br’er Fox and Br’er Bear now absent.

This will definitely not surprise anyone in “the know” about Disney Parks, as Disney announced a complete overhaul of the iconic Splash Mountain attraction a few years ago, turning it into an experience centered on Disney’s 2009 animated film, The Princess and the Frog.

Here’s what Disney has already revealed about the retheming:

In our recording of the parade from 2019, you can see the version with these two characters, and while they didn’t have too much of a presence in the show, their absence will surely be noticed. Nevertheless, there is an absolute ton of things to experience and enjoy during the Halloween party. Here are a few things you can expect, per Disney Parks Blog:

Will you be going to this year’s Halloween party?