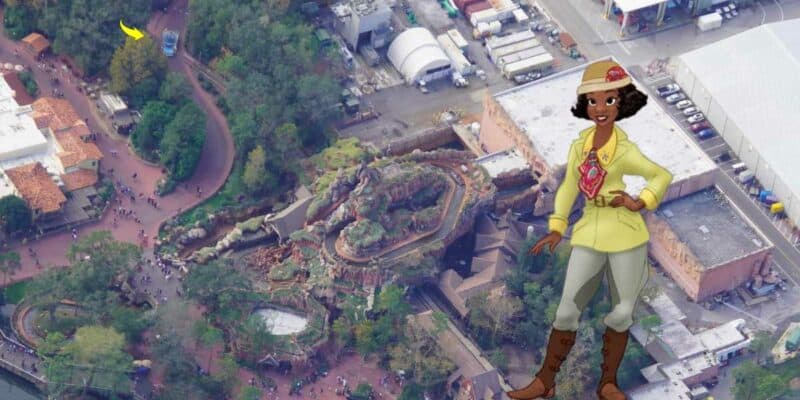 In just over a month, one 30-year-old attraction at Walt Disney World Resort will shutter for good. As The Walt Disney Company readies its massive Princess Tiana retheme, the current state of Splash Mountain has been revealed.

With four theme parks (Magic Kingdom, EPCOT, Disney’s Animal Kingdom, Disney’s Hollywood Studios) to choose from, Guests have a plethora of attractions at their fingertips. A Disney vacation looks different from one person to another, but one thing that tends to be a mainstay in many Guests’ trips is a ride on one of the Disney Resort’s classic rides — think Space Mountain and Peter Pan’s Flight, Spaceship Earth and Soarin’, Tower of Terror and Kali River Rapids.

But, over the last few years, it would be Splash Mountain that would be on the lips of many after Disney Parks announced the log flume attraction would be closed and rethemed to The Princess and the Frog (2009). Back in 2020, Disney Parks revealed that Splash Mountain — a ride based on the animated sequences of the controversial Song of the South (1946), which itself is based on the Uncle Remus stories of the 19th century — would be shuttered, paving the way for Princess Tiana to replace characters like Br’er Rabbit, Br’er Bear, and Br’er Fox.

The change at Walt Disney World Resort, and soon to be at Disneyland Resort too, caused ire among diehard Splash Mountain fans who, in part, deemed this an act of political correctness AKA being “woke”. Despite the near-constant backlash, Disney has steamed ahead with its plans to replace Splash Mountain with Tiana’s Bayou Adventure and just recently announced that the water ride’s last day of operation would be January 22, 2023.

As the days draw closer to that January closure, a new aerial photograph has revealed the current state of the Splash Mountain show building. Considerably large, as most Disney attraction show buildings are, Splash Mountain’s building hides behind the rocky facade Guests see from inside Magic Kingdom Park.

Over the next year, it will be interesting to see how Disney handles the dismantling of Splash Mountain and the installation of Tiana’s Bayou Adventure. Concept art and scale models at D23 Expo 2022 have given fans their best look at how Tiana, Naveen, Louis, and Mama Odie will look when they fully arrive at Walt Disney World Resort, but the developments throughout 2023 and 2024 will be followed with interest.

Tiana’s Bayou Adventure was announced at ESSENCE in New Orleans in the summer, with Anika Noni Rose — the voice of Tiana in the Disney animated classic and in the upcoming attraction — dropping that Disney planned for a late 2024 opening before the House of Mouse officially announced the date.

Related: Huge Show Building NOT Hidden From Guests Goes Viral For All the Wrong Reasons

Soon, fans will board their final boat and hear their last “Zip-A-Dee-Doo-Dah” as the countdown for Splash Mountain’s closure continues. Who knows, in just a year’s time this show building might be unrecognizable.

How quickly do you think Splash Mountain will change to Tiana’s Bayou Adventure? Let us know in the comments down below!