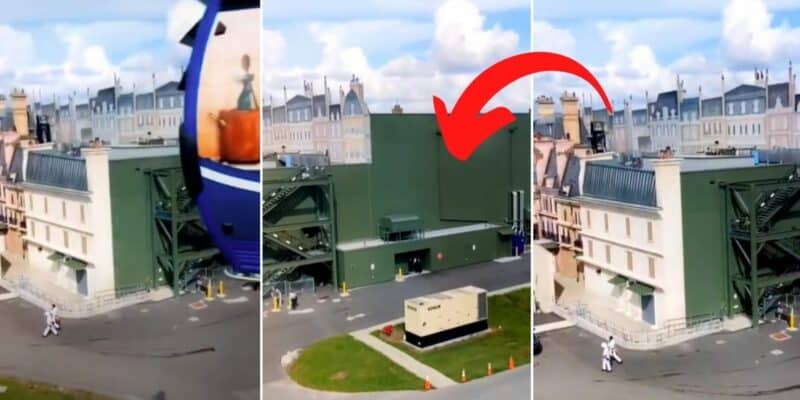 When you think of Walt Disney World, you probably think about the stunning Imagineering, the exquisite attraction details, and the magical atmosphere when walking down Main Street U.S.A. While a Disney Park is all that and more, sometimes Guests spot things that break the Disney magic, bringing the real world into their vacation in a rather intrusive way.

Some might even go on to say, ruining Walt Disney’s vision.

The Walt Disney World Resort in Central Florida is one of the world’s most popular vacation destinations. Magic Kingdom Park, EPCOT, Disney’s Hollywood Studios, and Disney’s Animal Kingdom, as well as Disney Springs, are all celebrating the 50th anniversary of the Disney Resort AKA The World’s Most Magical Celebration. With timeless characters donning new EARidescent costumes, new merchandise, and new nighttime spectaculars like Disney Enchantment at Cinderella Castle, Walt Disney World is a hub of magic, wonder, and dreams come true. But don’t forget the classic rides like Space Mountain, Spaceship Earth, and Haunted Mansion, as well as the Disney water parks, are all still available to experience.

Despite receiving backlash from the launch of Disney Genie, Disney Genie+, and FastPass+ entrance replacement, the Lightning Lane, Walt Disney World — as well as other Disney Parks like Disneyland Resort — have seen huge crowds and long wait times, showing that demand for the theme park experience is still there amid the pandemic. This was clear from the mammoth lines forming during the debut of Star Wars: Rise of the Resistance’s standby queue prior to Genie’s launch.

Speaking of virtual queue attractions, EPCOT recently welcomed the new Disney Pixar-themed ride, Remy’s Ratatouille Adventure, at the France pavilion inside the World Showcase. The attraction sees Guests shrunk to the size of Remy the rat as they dodge and swerve around a busy Parisian kitchen. As one of the most beautiful pavilions, the addition of Remy’s Ratatouille Adventure fits the French aesthetic in a seamless manner.

But not from all angles…

Should Backstage at Disney be hidden from view?

The video, which has gone viral with 1.6 million views, asks the question of whether Backstage at Disney Parks should be hidden from view and themed to the corresponding area. Now, some Disney fans will know that Disney has created two colors to use on specific areas, but this massive green wall as Guests enter EPCOT Park via the Skyliner is sure to cause issues.

The comments on the viral video recognize that the wall should be themed with callouts against the Park for not continuing Walt’s vision of complete Imagineering. One comment said it “ruined the experience” while another stated it was “pure laziness”. Obviously, not all Guests would see this part of the Park and it would not be on show when inside EPCOT and the France pavilion, but for those on the Disney Skyliner it could put a dampener on a Guests visit as it seemingly breaks the Disney Magic.

There is also the notion that Disney is a theme park and not every single section can practice the level of Imagineering expected. However, due to Disney Parks longevity as the leader in this area, it is surprising that such a large part of a show building has been completed without detail.

Earlier this year, another video surfaced of the show building for the brand-new and upcoming attraction, Guardians of the Galaxy: Cosmic Rewind, which is seemingly taking over the EPCOT skyline. The question is: Is Disney prioritizing big rides in favor of overall Park theming and experience? Only time will tell just how the Guardians coaster will be completed. At the other end of the spectrum, the upcoming TRON ride at Magic Kingdom is definitely bringing the future to Tomorrowland.

What is your view on Disney’s Backstage areas? Let us know in the comments down below!