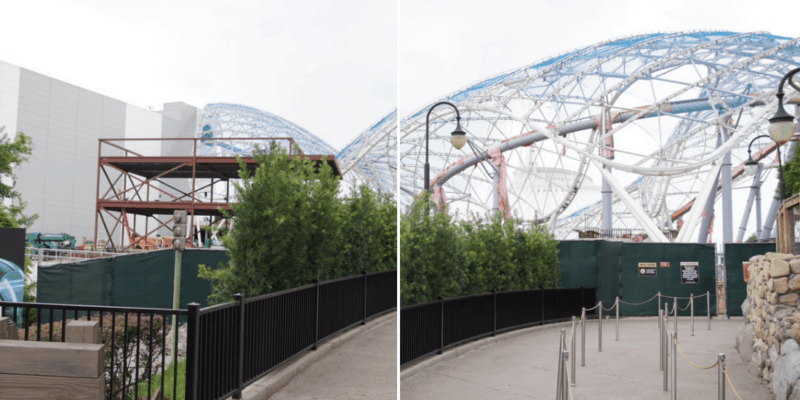 When it comes to theming at Disney World, most would say that the Imagineers do an impeccable job. That being said, one of the original things that Disney would typically look out for, sightlines, no longer seem to be a huge concern.

In the past, we have seen Disney Imagineers move to great lengths to ensure that a new building would look good no matter where the Guest saw it. For example, Tower of Terror was created to look like one of the buildings in the Morocco pavilion at EPCOT since the attraction was visible from the pavilion. Now, as more attractions and lands are added, it is getting harder and harder to do that.

One attraction that many Disney fans are patiently awaiting is TRON Lightcycle/Run to open at the Magic Kingdom. The attraction has been under construction for years and has even affected other attractions such as the Walt Disney World Railroad.

The ride does not yet have an opening date, but we have seen construction progress heavily over the past few months. Aside from the PeopleMover attraction, one of the best spots to get construction updates for  TRON Lightcycle/Run is in the queue for Barnstormers in the Storybook Circus section of the Park.

Of course, seeing a giant futuristic light-up coaster next to Storybook Circus is not ideal when it comes to theming and sightlines; however, as the theme park continues to grow and add new things, there is only a certain amount of area to play with.

We can see that although Disney cannot hide the new attraction, they are taking steps to ensure Guests know that the attrition belongs in Tomorrowland, a separately defined space, and not Storybook Circus. Bioreconstrcut has shared a photo of newly planted ferns lining the exterior of the attraction.

Seems like landscaping to hide Tron from Storybook Circus is underway.

There is still a lot more to be done in terms of the landscaping before we can accurately judge how well they can hide areas of the new coaster. At least these ferns will work for Guests who are directly next to them.

Stay tuned to Inside the Magic as we will continue to update you on what changes happen over time!

What do you think of Disney World no longer having sightlines as a priority?