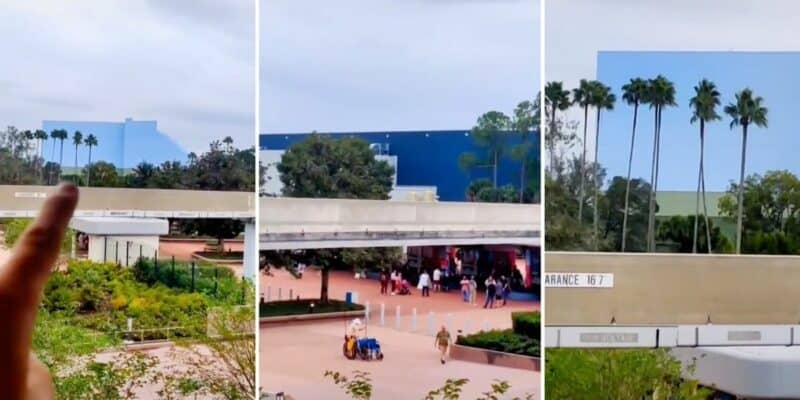 As the Walt Disney World Resort celebrates its 50th anniversary AKA The World’s Most Magical Celebration, construction (and destruction) is still underway to bring completely new elements to the Central Florida theme park.

One of those developments is the new Disney meets Marvel attraction, Guardians of the Galaxy: Cosmic Rewind at EPCOT Park and new video footage reveals just how dominant the new ride will be at the Disney theme park.

Amongst all the 50th moments, and the launch of the divisive Disney Genie, Disney Genie+, and Individual Lightning Lane Selection systems, Disney World is still speeding through ongoing developments in order to bring Guests, even more, Disney magic. But at what cost?

Over at Disney’s Animal Kingdom, the demolishing of Primeval Whirl at DinoLand U.S.A. is somewhat complete leaving the space wide open for Disney Imagineers to create more experiences for the Park. Near Disney’s Hollywood Studios, the construction of Disney’s most expensive hotel — Star Wars: Galactic Starcruiser — is currently underway. And over at EPCOT, developments on Guardians of the Galaxy: Cosmic Rewind are soaring towards its confirmed 2022 opening.

In a new video from Disney World Tom (@waltdisneyworldparks) on TikTok, we can see that the massive show building set to house the Marvel coaster is seemingly taking over the EPCOT skyline, throwing up questions of whether, and how, the Disney Park will adapt the attraction’s theming to sit within the wider Park experience.

We love the theming

The video shows two massive colored buildings which will be part of EPCOT’s new neighborhood, World Discovery, joining the also new World Nature, World Celebration, alongside the existing fan-favorite, World Showcase. The latter, of course, houses the country Pavilions and brings cultures from all over the world to the Walt Disney World Resort.

Even for Parks like Walt Disney World, where Guests expect a certain level of precision and experience, it is hard for huge attractions to be completely hidden. We only have to look at rides like Haunted Mansion and Pirates of the Caribbean in Magic Kingdom to see how well-crafted the Disney Imagineers have made the popular rides. But Guardians of the Galaxy: Cosmic Rewind — at least from this video — is set to completely change the EPCOT skyline forever.

From the comments, it can be ascertained that fans are less than impressed with the developments at the Disney Resort. One user wrote, “I think Walt would be upset”, while another commented, “I feel like instead of painting it to blend in they could have made the outside look more space themed or something I feel like it would blend better”.

There is no confirmation that this is the final product of the show building exterior. Recent reports stated that the attraction’s interior was seemingly almost complete and that visible construction was still in progress on the outside of the attraction.

This will be the second Guardians of the Galaxy-themed attraction at Disney Parks with Guardians of the Galaxy — Mission: BREAKOUT! over at Disney California Adventure within the Disneyland Resort. Guardians director James Gunn has been confirmed to be filming new footage for the EPCOT ride with the leading man, Chris Pratt, also reprising his role as Peter Quill/Star-Lord, along with some of the other cast.

Do you think this massive show building should have been themed better? Let us know in the comments down below!